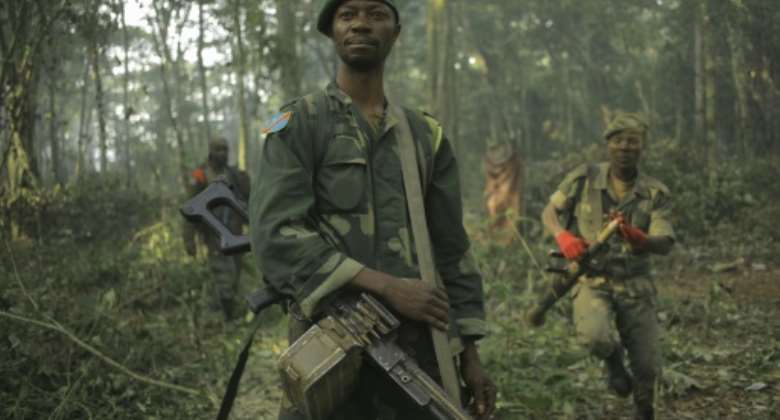 Democratic Republic of Congo soldiers are battling the ADF rebels in a joint operation with Ugandan troops. By SÃ©bastien KITSA MUSAYI (AFP)

Bags on their backs and guns slung across their chests, soldiers trudge into the forest in northeastern Democratic Republic of Congo towards alleged hideouts of the ADF rebel group.

Just instants earlier, rocket launchers fired a salvo in the direction of purported camps of the Allied Democratic Forces (ADF) near the border with Uganda.

It is the third week of a joint Congolese-Ugandan military operation against the group, who are accused of massacres in eastern DR Congo and bomb blasts in Uganda.

"We will fight to the ultimate sacrifice," one young Congolese soldier tells journalists, on an army-led trip to the frontline in the world-famous Virunga National Park.

Ugandan soldiers have crossed over into the country since late November. By SÃ©bastien KITSA MUSAYI (AFP)

All around him, the forest is a haven for rare species, including elephants, hippopotamuses, lions and okapis.

Mountain gorillas live in the south of the park. But in its north, ADF rebels are believed to be hiding between the trees.

But the group established itself in eastern Democratic Republic of Congo in 1995, later becoming the deadliest of scores of outlawed forces in the troubled region.

The Virunga National Park is home to elephants, hippopotamuses, lions and okapis -- but also rebels. By SÃ©bastien KITSA MUSAYI (AFP)

At a former base for UN peacekeepers inside the forest, two generals -- one Congolese and the other Ugandan -- have set up their temporary headquarters.

A thermos of warm coffee sits on a camping table, as they discuss their next moves and keep track of Congolese foot soldiers and Ugandan mountain troops marching forward under the green canopy.

It was at this very same base in Semuliki that ADF rebels killed 15 Tanzanian peacekeepers in 2017.

The Congolese and Ugandan armies launched their joint operation with air and artillery strikes on the DRC's North Kivu and Ituri provinces in late November.

Ugandan troops then entered the DRC via the Nobili border crossing, setting up a temporary base a dozen of kilometres away while the road was repaired to allow heavy vehicles through.

Three weeks into the operation, the army has not announced any death casualties.

A DRC commander and an activist in Ituri on Friday said at least eight civilians had been killed in villages there by ADF fighters fleeing the military operations against them.

Antony Mualushayi, DRC army spokesman in North Kivu's Beni territory, said some roads had been fixed and armoured vehicles had rolled in.

"The large-scale operations are going extremely well," he told journalists, urging any civilians in the area "not to panic because of the heavy weapons".

Exhausted by years of insecurity and killings, inhabitants have for now welcomed the intervention of Ugandan troops. By SÃ©bastien KITSA MUSAYI (AFP)

On Wednesday, the Congolese coordinator of the operation, Major General Camille Bombele, urged people in the region to "collaborate with the army and the police".

He said DRC President Felix Tshisekedi and Ugandan leader Yoweri Museveni had "united forces to impose peace on the region".

Since May, North Kivu and Ituri have been under a "state of siege" to intensify the battle against the rebels, with soldiers replacing civil servants in key positions. But they have not yet managed to quell the insurgency.

Exhausted by years of insecurity and slaughter, inhabitants have for now welcomed the intervention of Ugandan troops.

But they have not forgotten Uganda's role in destabilising their country over the past quarter of a century.

In the late nineties, Uganda sent in troops allegedly to track Ugandan rebels there, including the ADF.

But its soldiers were accused of pillaging resources in gold-rich Ituri and stoking deadly tensions between communities, before turning on DRC government troops and briefly battling Rwandan soldiers too. They only withdrew in 2003.

The DRC's Tshisekedi on Monday pledged to make sure the Ugandan army only remained in the country long enough to fight the ADF.