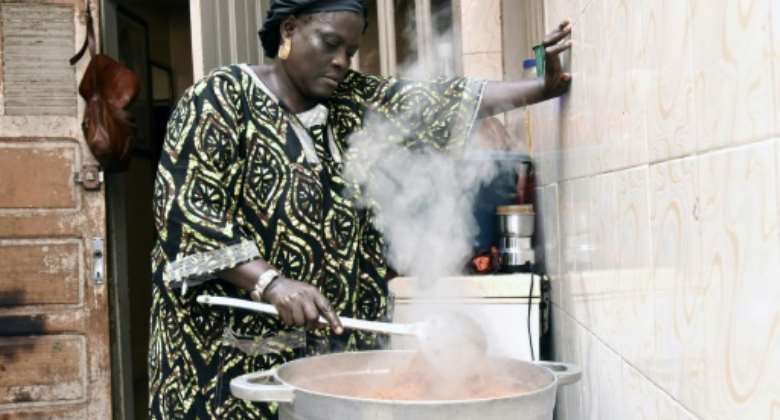 Senegalese cook Thiane Ngom's face lights up when she learns that thiebou dieune has been added to the UNESCO cultural heritage list. By SEYLLOU (AFP)

In a small restaurant in Senegal's seaside capital Dakar, Thiane Ngom has risen early to cook up a batch of thiebou dieune, the country's most popular dish, before the lunch rush.

Meaning "rice with fish" in Senegal's dominant language Wolof, thiebou dieune takes about three hours to prepare, and is commonly served at lunch in the West African nation.

To the sound of Senegal's popular Mbalax music, the 53-year-old restaurant owner washes and prepares onions, garlic, carrots and aubergines to go with the fish and rice.

As the onions crackle in oil, Ngom's face lights up when she learns that thiebou dieune has been added to the UNESCO cultural heritage list.

She says she learnt how to make the rice and fish dish from her mother. By SEYLLOU (AFP)

On Wednesday, the United Nations' cultural agency listed the dish to its Intangible Cultural Heritage of Humanity, following an application from the Senegalese government in October.

"It's a source of pride for me, for us Senegalese, that it has been recognised worldwide," says Ngom, in Wolof.

"From now on, people will come here to taste our dish, and especially to learn how to cook it," she adds, explaining that her mother taught her how to prepare it.

Thiebou dieune is a staple of her restaurant and has never been off the menu in its 25 years of existence -- a testament to its widespread popularity.

Thiebou dieune first emerged because of colonial trading links, according to UNESCO, as rice produced in French Indochina was imported into Senegal. By SEYLLOU (AFP)

Thiebou dieune is usually eaten with hands, but spoons and forks are also commonly used in Dakar restaurants.

According to UNESCO, it is generally forbidden to sit with a raised knee while eating the dish, or to drop a grain of rice.

"The recipe and techniques are traditionally passed down from mother to daughter," the agency said in a statement.

The northern Senegalese city of Saint-Louis is believed be the birthplace of thiebou dieune.

The city, whose old centre is itself a UNESCO World Heritage site, borders the Atlantic Ocean and hosts a thriving fishing community.

It was also once the capital of the French colony of Senegal, until the country's independence in 1960.

Thiebou dieune first emerged because of colonial trading links, according to UNESCO, as rice produced in French Indochina was imported into Senegal.

Popular lore casts a woman named Penda Mbaye, a cook from Saint-Louis, as the inventor of the dish.

On Wednesday, social media users in Senegal praised UNESCO for recognising thiebou dieune. Many also commented that Penda Mbaye herself would be proud.