In Benin, growing fears over law that can jail journalists for posting news online 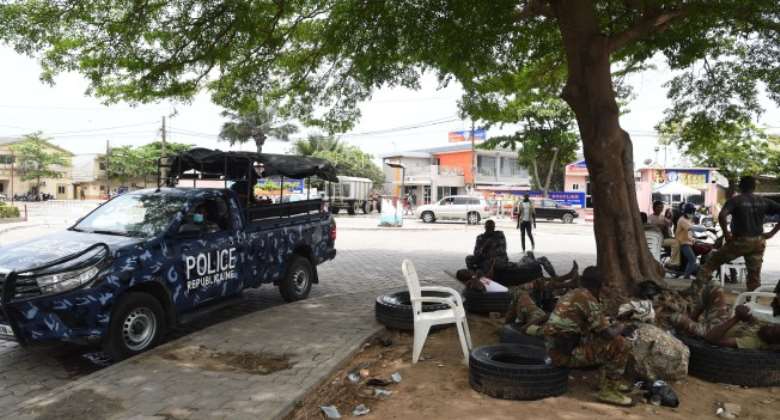 Police officers and soldiers in Cotonou, Benin on April 12, 2021. At least two journalists were jailed in 2021 under the country's digital code after a report in their newspaper was shared on social media. AFPPius Utomi Ekpei

Posting on Facebook from Benin’s Central Office for Repression of Cybercrime on November 18, journalist Patrice Gbaguidi wrote that authorities had summoned him for a second time in two weeks over a defamation complaint about one of his articles. That day, he and Hervé Alladé, the owner of Le Soleil Bénin Infos newspaper where Gbaguidi is the editor, were charged under Benin’s digital code and sent to jail.

On December 7, Gbaguidi and Alladé were convicted and sentenced to a six-month suspended prison sentence and fined 500,000 West African francs (US$861), then released, their lawyer, Narcisse Atoun, told CPJ via messaging app. Since the two journalists were both in detention on December 1, they are featured on CPJ’s 2021 prison census, which documents journalists jailed in connection to their work around the world on that day.

At least three other reporters behind bars at that time in Benin—Gilbert Dagan, Anatole Adahou, and Argos Adihounda—do not appear on this census as CPJ continues to investigate whether their imprisonment is directly related to their journalism. But their arrests and convictions under the same digital code emphasize how the West African nation’s 2018 law criminalizing expression online threatens press freedom.

“There is something wrong in the [digital] code,” Bashola Moustapha, the publisher of the local Afrique Média newspaper, told CPJ over the phone. “Whenever you publish anything, it could be a news item, whenever it is published on any social network you could be punished,” he said.

Broadly worded, Article 550 of the digital code pertains to “harassment through electronic communications” and provides for up to two years in prison and/or fines of up to ten million West African francs (US$17,196) for various crimes. Anyone who, for example, “initiates an electronic communication that coerces, intimidates, harasses or causes distress” or “initiates or relays false information against a person through social networks” may be charged.

Dagan, Adahou, and Adihounda were arrested under Article 550 on September 6 and convicted on September 22 for posts shared through their personal social media accounts, according to the arrest warrants for the journalists, which CPJ reviewed, local media reports, and Moustapha. The three were sentenced to six months in prison—three of them suspended—and released on December 6 having served that time, according to Moustapha, who said he attended their trial.

Moustapha told CPJ and wrote on his outlet’s Facebook page that Dagan, Adahou and Adihounda’s posts responded to an audio recording shared on social media by a Beninese businesswoman, which called on the mayor of Benin’s Savalou city not to permit a local folk music artist to perform there. In early March, Dagan wrote on Facebook that his post was “false” and claimed “mea-culpa.”

Similarly, Gbaguidi and Alladé’s prosecution under Article 550 was triggered when a report published in their newspaper was shared on social media, Brice Ogoubiyi, a friend of Alladé and director of the local Nouvelle Expression newspaper, told CPJ.

CPJ’s questions sent via messaging app to Jules Ahoga, the prosecutor in each of the cases, went unanswered.

Gbaguidi and Alladé’s arrest “reminds us of the need to step up efforts to review the Digital Code as soon as possible, which has the sword of Damocles hanging over the heads of media players,” Zakiatou Latoundji, the Union of Media Professionals of Benin (UPMB) president, said in a statement on November 19.

In December 2019, investigative journalist Ignace Sossou was arrested, convicted, and jailed for six months under the digital code for social media posts that quoted Benin prosecutor Mario Mètonou, CPJ reported at the time. Ironically, Sossou was imprisoned for quoting Mètonou’s description of the digital code as “a weapon” that may be used against the press, according to an article by Benin Web TV, the news site for which Sossou reported. Sossou was also convicted under Article 550 in a separate case in August 2019 following a complaint by a local businessman, CPJ reported; he was fined and received a suspended prison sentence of one month.

In April 2019, CPJ reported how Benin editor Casimir Kpedjo was detained for five days and accused of spreading false information under Article 550 of the digital code. Kpedjo told CPJ in early December 2021 that the same case remained open against him and that his next court date was scheduled for January 22, 2021.

Cyber laws are increasingly being used to target reporting in countries ranging from Pakistan to Nicaragua. Gbaguidi, Alladé, Dagan, Adahou, and Adihounda may no longer be behind bars, but as journalism moves increasingly online, the threat from laws like Benin’s digital code is expected to loom even larger.

“We cannot be talking about [digitalization of the press] and punish journalists that are using the newest tools of communication,” Moustapha explained. “Our fight now as journalists is to reverse this code, asking parliamentarians to go back to parliament to revise [it].”