Farmer's Day: The kind of awards given to best farmers discouraging others to go into agric — Gomoa Chief 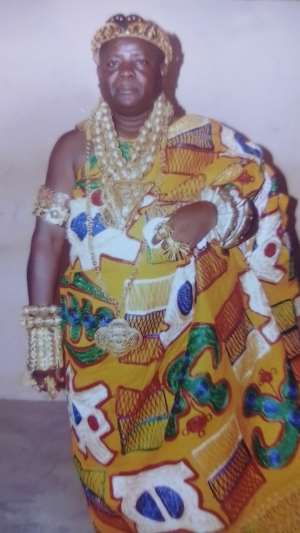 Chief of Gomoa Brofoyedur in the Gomoa Central District of the Central Region, Nana Esoun Abonyi Kwata II has expressed his unhappiness with the kind of awards given to farmers during Farmer's Day celebrations, especially at the District level.

Nana Esoun Abonyi Kwata II who works at Ghana Revenue Authority (GRA) and a farmer has said the kind of prizes awarded to Best Farmers at the District level were discouraging people who want to go into agriculture.

Interacting with some Agriculture Extension Officers at Gomoa Brofoyedur, the Chief advocated for the overhauling of prizes awarded to farmers in the various categories.

According to the Traditional Ruler, one cannot fathom how some Districts could give appreciably prized to Best Farmers while the same thing could not be given to farmers in another District within the same Region describing it as a discouragement to potential farmers.

"How come a District Best Farmer in the Gomoa Central be given a Motor Bike while her colleagues in Gomoa East and Gomoa West be given Tricycle popularly known as 'Aboboyaa'?

"It is unfortunate and disheartening to be treated in such a horrible manner especially when the 2021 District Best Farmer in Gomoa Central is a Woman. I wonder how she will ride the motorbike to her farm with all her farming tools and equipment.

"She could at least be given a tricycle to cart her farm produce to the roadside or the market centers rather than the motorbike," he stated.

The Gomoa Brofoyedur Chief who is also the Esihene (Kingmaker) of the Gomoa Ajumako Traditional Area also bemoans the nature of the distribution of farming inputs to farmers in the Gomoa Central District.

He recounted a number of times farming inputs meant for farmers at subsidized prices gets to the opened market center to be sold.

"Sometimes too, the seeds and other inputs like fertilizers and other tools are supplied to beneficiary farmers at off-seasons.

"Gomoa Brofoyedur, for example, is a typical farming community so we need to get the needed inputs and outputs at the appropriate time.

"I will like to make a passionate appeal to the Central Government through the Ministry of Food and Agriculture to involve Nananom in the distribution of farming inputs.

"We (Nananom) as custodians to farmlands in our Communities knows the capability of every farmer in the community so that it won't go into wrong hands to be sold out at prices far above the pockets of the poor farmer.

"It is unimaginable that subsidized inputs and outputs which could be affordable to the farmers sneak out to the opened market and individual hands.

"As a farmer, I know the kind of frustration farmers goes through to make ends meet. Planting For Food and Jobs, Planting For Export and Rural Development is perfect but the implementation is not being useful to the farmers," Nana Esoun Abonyi Kwata II stressed.

However, the Gomoa Central District Director of Food and Agriculture, Mr Richard Marcus Odame could not agree with the Traditional Ruler assertions.

He noted that every award winner received what would be useful stressing that every category of the awards gets the needed prizes.

"Perhaps, our field Officers should intensify their public education especially supply of farming inputs and our way of operations in the various communities in the District.

"They must constantly be in touch with the people in their fields, that is their core duties," he emphasised.

The Gomoa Central District Chief Executive, Hon. Benjamin Kojo Otoo told this reporter that the Assembly was not in a competition with any other district when it comes to Farmer's Day celebrations.

According to him, it depends on the individual Assembly's purchasing power, "so it will be wrong for people to equal Districts when it comes to Farmer's Day celebrations."