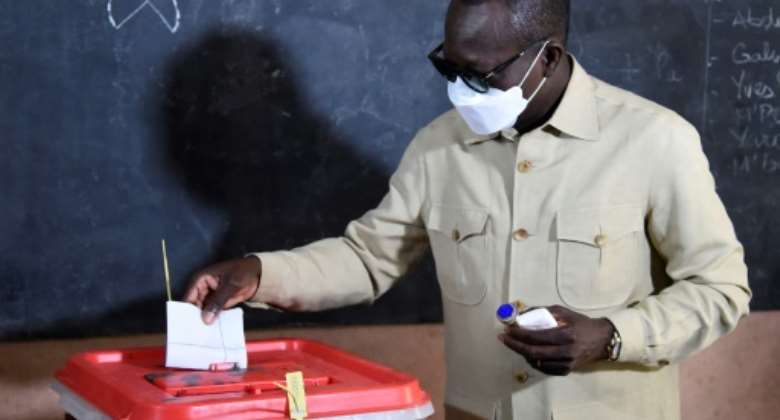 President Patrice Talon casting his ballot in the April 11 election. Several opposition leaders were detained before or just after the vote. By PIUS UTOMI EKPEI (AFP)

A special court in Benin on Tuesday sentenced one of the country's opposition figures, Joel Aivo, to 10 years in prison after a treason trial critics dismissed as a politically-motivated sham.

Several opposition leaders were detained before or just after an April election that saw President Patrice Talon win a second term with more than 86 percent of the vote.

Aivo, an academic who had been held for eight months, had pleaded not guilty to the charges of plotting against the state and money laundering.

When the verdict was given at around 3 am on Tuesday after a 16-hour trial, a few Aivo supporters were still in the court, wearing T-shirts that read, "Professor Aivo, the people of Benin are with you."

It was "a sham of a trial, to sideline him from politics," Sosthene Armel Gbetchehou, a former student of the condemned opponent, told AFP.

Aivo was among the opposition figures who had been barred from running in the presidential election.

Aivo was arrested on April 15, four days after elections that saw Talon returned to power.

He was tried at a special tribunal, the Economic Crime and Terrorism Court (CRIET), in the West African country's administrative capital, Porto-Novo.

The CRIET, set up in 2016, has often been accused by critics of being used by Talon's regime to crack down on the opposition.

"Given the overall trends of this court, this (sentence) was expected. But we did have a glimmer of hope in what we saw in the facts and substance of the case," said Robert Dossou, one of Aivo's attorneys.

He said they would discuss details of any appeal later.

Government officials dismiss charges the CRIET is a political tool and say the country's justice system is independent.

Once praised for its thriving multi-party democracy, critics say Benin has slipped steadily into authoritarian rule under Talon, a 63-year-old cotton magnate first elected in 2016.

Some opposition figures have fled the country while others were disqualified from running in elections, or targeted for investigation.

"More proof of the judicial persecutions going on in Benin against the political opposition," tweeted Julien Bensimhon, a French lawyer to another Benin opposition leader convicted by the court.

"CRIET has once more been used to politically kill off anyone who opposes Patrice Talon."