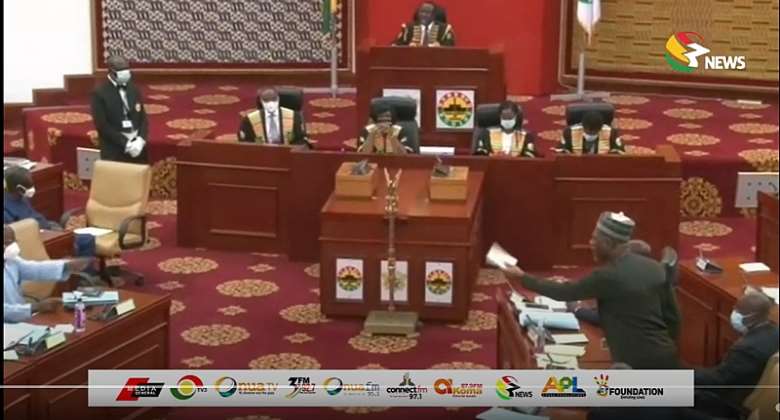 The Minority in Parliament were heard singing the Revolution song as they objected to the approval of the 2022 budget statement.

This was after the First Deputy Speaker of Parliament, Joseph Osei Wusu (Joewise) had justified the approval of the 2022 budget statement.

During deliberations in the House on Wednesday December, 1 he stated that a Deputy Speaker could not be described as a Speaker hence, arguments being against the number of MPs in the chamber as of the time of the approval of the budget could not hold.

“When the Speaker is not around either of us can preside so like any other member. That member does not lose his right of being a member of the House.”

Member of Parliament for Essikado-Ketan, Mr Joe Ghartey had asked him not to set aside the approval.

He said the approval of the budget statement by Parliament on Tuesday, November 30 was constitutional

To that end, a motion by the Minority to reject the approval should be dismissed completely, he added.

The former Attorney General said the approval was grounded in law because the number of MPs required in parliament to take decision met the constitutional threshold.

“I urge you not to change your mind. What you did was grounded in the constitution, it is grounded in law,” he said.

For his part, a former Deputy Attorney General Dr Dominic Ayine asked persons quoting the constitution to support the approval of the 2022 budget to read the constitution as a whole to be able to arrive at a meaningful conclusion, a point that was supported by Mr Joe Ghartey.

Dr Ayine said those arguing for the approval of the budget could not pick and choose aspects of the constitution to support their points. Otherwise, he said, they will be wrong.

Contributing to the discussion on Wednesday, December 1, the Bolgatanga East MP said “We think the decision that was taken yesterday gross undermining of the Constitution of the Republic of Ghana.”

The Minority in Parliament were seeking to overturn the approval of the budget by the House on Tuesday, November 30, without them.

Minority Leader, Haruna Iddrisu in moving a motion to overturn the approval said 137 lawmakers of the Majority could not have taken a decision.

He said they don't consider Deputy Speaker Joseph Osei Wusu (Joewise) who deliberated over proceedings yesterday, as Member of Parliament at the time he was sitting in as speaker hence, that leaves the number present at 137.

It is recalled that immediately after the approval of the budget on Tuesday, Haruna Iddrisu said that the Majority did not have the numbers to enable them approve the 2022 budget statement.

He said at a press conference in Parliament that as of the time the Majority were taking the decision to approve the budget, they were 137 and not 138.

“The precedent they are setting will haunt them in the future. At the time that they were taking the decision the house was not 137.”

They further rejected the assurance by the Finance Ken Ofori-Atta that their concerns in the 2022 budget would be addressed at the committee level.

Haruna Iddrisu said that they wanted their concerns captured in the original budget statement, not to be discussed at the committees' sittings.

“If you are acknowledging and admitting that there were concessions, let it reflect in the statement” and not a meeting at the committee level.

He further stated that the Minority will oppose to the E-levy proposal in its current any day and anytime.

“We don't support the E-levy in its current. Our point is to revise it to take care of the ordinary people.”

The Finance Minister Ken Ofori-Atta had assured them that all the issues they raised against the 2022 Budget, would be addressed at the committee level.

The Minority had raised issues including the request that the budget for Parliament should be raised from GHS510m to GHs1.7bn, issues about the e-levy and others.

Mr Ofori Atta said in Parliament on Tuesday, November 30 that their concerns would be considered.

His comments came just before Parliament approved the 2022budget statement on Tuesday, November 30.

The First Deputy Speaker who sat in for the Speaker said on Tuesday, Joseph Osei Owusu said that “The House has adopted the Financial statement and approved the budget statement for the ensuing year ending 31st December 2021.”

“This house has approved the budget and economic statement,” he stressed.

The Majority Leader in Parliament, Osei Kyei Mensah Bonsu had asked him to set aside the purported rejection of the 2022 budget statement.

Mr Kyei-Mensah-Bonsu said on the floor of the House on Tuesday, November 30 that the rejection of the budget “did not meet the test established under Article 104,” because Parliament did not have the required numbers to be present in the chamber for purposes of taking decisions.

The minority boycotted the sitting.