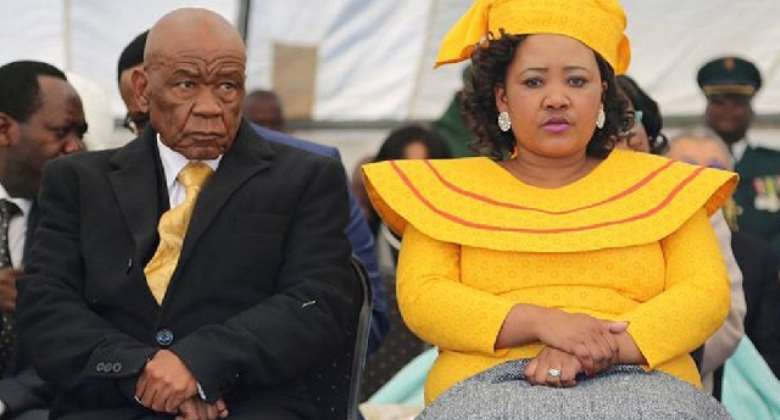 Lesotho's former Prime Minister Mr Thomas Thabane has been charged with the 2017 murder of his estranged wife Lipolelo Thabane.

His current wife, Maesaiah, was charged with the same crime last year.

She was living with Mr Thabane at the time of the killing and they are accused of hiring hitmen. They have both denied any involvement.

Mr Thabane stepped down in May 2020 following months of pressure after he was named as a suspect.

The case has shocked many and caused political ructions in the small landlocked kingdom which is entirely surrounded by South Africa.

Maesaiah Thabane accompanied the 82-year-old former prime minister to court. She was charged last year and then released on bail.

The charges were read out in the boardroom of the High Court in the capital, Maseru, rather than in the main courtroom, which is normal practice, the AFP news agency reports.

Gunmen shot and killed Lipolelo Thabane on 14 June 2017 - two days before Mr Thabane was sworn in as prime minister.

While returning home, she was ambushed, shot several times at close range and died on the side of a dirt road. She was 58.

At the time, Lipolelo was going through a bitter divorce with Mr Thabane and had been living apart from her husband since 2012.

He had moved in with Maesaiah some time between 2012 and 2017. They married two months after Lipolelo's death.