By Amaury HAUCHARD with Daphne BENOIT in Paris
Africa 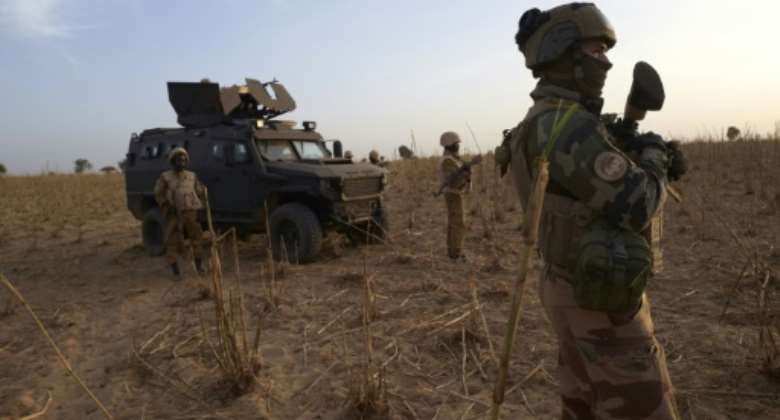 France has around 5,100 troops deployed across the Sahel region. By MICHELE CATTANI (AFP/File)

France's military involvement in the Sahel is encountering growing opposition in the region, with protests that were once isolated to urban centres spreading to rural areas, fanned by social media and anger at insecurity.

The trucks, escorted by local forces, took more than a week to get through Burkina Faso, and several people were injured during demonstrations in the northern town of Kaya.

In western Niger, two people were killed in unclear circumstances on Saturday when the convoy attempted to escape protesters.

France's military has opened an investigation.

Experts say the affair appears to show that anti-French sentiment has spread in the Sahel, although the reasons for it are complex.

France, the former colonial power in the Sahel, has about 5,100 troops deployed across the region, helping to support countries where governments are weak and the armed forces poorly equipped.

The French military first intervened in 2013 to beat back a jihadist insurgency in northern Mali.

Map showing zones of influence by armed groups in the Sahel.. By (AFP/File)

But the rebels regrouped and two years later spilled over into Burkina Faso and Niger, two of the poorest countries in the world.

Village massacres, roadside bombs and ambushes have claimed thousands of lives and more than a million people have fled their homes.

The insurgency no signs of slowing. On Sunday, four Burkinabe soldiers were killed in the north of the country, bringing the toll from two weeks of raids by suspected jihadists to at least 80.

A French diplomat, who declined to be named, said that many local people did not understand how jihadists could make such gains when French troops are present.

The situation has contributed to conspiracy theories alleging French support for jihadists, according to Bamako-based researcher Boubacar Haidara.

Malian Prime Minister Choguel Kokalla Maiga recently accused France of training a "terrorist group" in the north of the country, in an interview with Russian news agency RIA Novosti.

The fact that such rhetoric "comes from an authority as high as the prime minister gives it credibility," Haidara said.

Rumours proliferating on social media -- which were also recounted by several protesters in Kaya -- claimed the supply convoy was in fact carrying weapons for the jihadists.

Yvan Guichaoua, a Sahel specialist at the University of Kent in England, told AFP that France is swimming in a "pool of hostility".

The scale of the sentiment is difficult to measure, he noted, adding that it is nonetheless "imposing itself on the Sahel political space," with governments forced to respond.

Not all are critical of France: Niger's President Mohamed Bazoum on Friday thanked the country for its military involvement.

A French government official, who requested anonymity, nonetheless told AFP that the situation is "worrying".

"People are turning against those on the front line," the official said.

Complicating the picture is French President Emmanuel Macron's decision to reduce France's deployment in the Sahel.

He made the decision in June, after a military takeover in Mali in August 2020 that ousted the elected president Ibrahim Boubacar Keita.

But the announcement pushed Mali's ruling military to consider hiring paramilitaries from Russian private-security firm Wagner to bridge the gap, which further raised tensions with France.

Macron has promised that French troops will not operate in a country where Wagner paramilitaries are also active.

However there are fears that a full French withdrawal would precipitate a collapse in Mali, with implications for the wider Sahel conflict -- a unwelcome prospect just over four months from a French presidential election.

Anti-French sentiment has long been rife on social media in Mali. There are also periodic protests against France's military in the country, where demonstrators fly Russian flags.

France has recently tried to respond to what it terms a Russian disinformation campaign back by erecting billboards in the capital Bamako bearing the slogan "we are together," and issuing statements in the country's dominant language Bambara.

A competition for loyalties is underway. "The Russians are reshuffling the deck," said a high-ranking French army officer, who declined to be named.