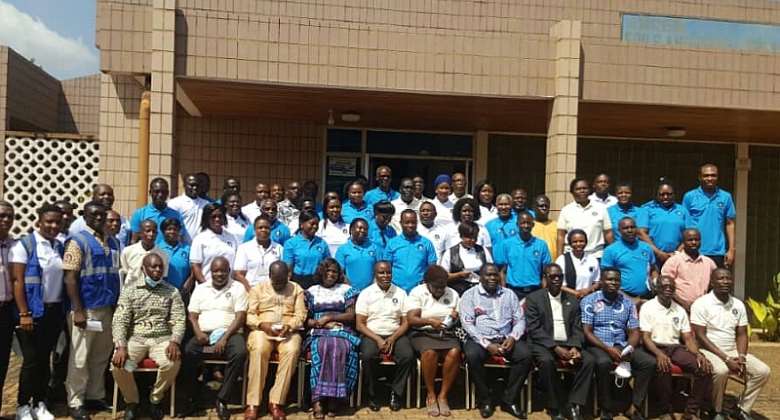 Delegates in a group photograph with management of CSIR

The maiden conference under the theme, "Sustainability of Commercialization, Research and Development in CSIR, in COVID-19 Era and beyond - the Role of CAAG" was held at the Soil Research Institute (SRI) of the CSIR at Kwadaso in the Ashanti region.

The immediate past president of the association, Dr. Mohammed Braimah Baba addressing the conference said CAAG as the administrative arm of CSIR plays a major role in the research process and commercialization of the Council's research products and services.

He however regretted that despite CAAG's vital role in the nation's research and commercialization business, the state over the years failed to place them on the appropriate salary structure.

Dr. Braimah said the Single Spine Salary rationalization and implementation policy has marginalised all non-core Senior Staff of the CSIR since its implementation in 2012.

He indicated that all appeals to the Fair Wages and Salaries Commission to rectify the wrong placement of CAAG members on both the Salary Structure and Market Premium way back 2012 have fallen on deaf ears.

Dr. Mohammed Braimah Baba noted the association in January 2019 tabled a 24-point petition before the Fair Wages and Salaries Commission (FSWC) through the National Labour Commission (NLC) for redress.

He further disclosed that the association since the petition has appeared before the National Labour Commission (NLC) thirteen times and is to make its fourteenth appearance come December 1st, 2021 for a final date for hearing on the subject to be fixed.

The newly elected president of the association, Vincent Nsiah-Agyei in his post election speech said CAAG under his administration will not rest until the Fair Wages and Salaries Commission (FWSC) grants the association's demands.

Mr. Vincent Nsiah -Agyei also promised that CAAG will continue to collaborate with management of CSIR as a mother institution to champion sustainable commercialization, research and development agenda in Ghana.