Covid-19: Pre-packed snacks should be served in planes to curtail spread of deadly Omicron 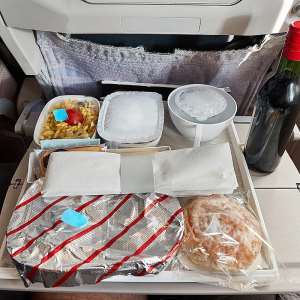 With the new COVID 19 variant, Omicron spreading so fast and threatening the lives of many around the world, the Citizen Watch, one of the pressure groups in the country is calling on the air transport regulators to reconsider how juices and snacks are served on planes.

Most of the travelers that Citizen Watch spoke to have kicked against the outmoded method of serving snacks in planes which has the potential of hiking the spread of the virus.

According to Citizen Watch, one litre of juice when open is taken around and shared among passengers which may be a conduit for the COVID 19 transmission.

“Our point is that as the air host pours the juice and at the same time communicate with the passenger could be a potential source of the spread of the virus”, it said in a statement issued in Accra and signed by Elikem Agbenyegah, Convener of the group.

The statement noted that the best option which could be used to curtail the further spread of the virus would be serving a pre-packed snack to passengers on board to reduce the potential risk of contamination and spread of the disease.

“Serving in a pre-packed with a straw reduces mouth opening activities also known as vocal aperture.

“Our major concern is that, with the new variant which is highly transmissible, we are hopeful with this new measure it would improve confidence in our air travels as well as increase passenger travels,” it said.

The statement has called on the regulators, the Ghana Airport Company, Ghana Civil Aviation Authority and IATA to ensure the implementation of pre-packed snacks for passengers to ensure safe travels.

Aside this, the statement also called on travelers to eat and drink healthy snacks.

The B.1.1.529 variant was first reported to WHO from South Africa on 24 November 2021. The epidemiological situation in South Africa has been characterized by three distinct peaks in reported cases, the latest of which was predominantly the Delta variant. In recent weeks, infections have increased steeply, coinciding with the detection of B.1.1.529 variant.

The first known confirmed B.1.1.529 infection was from a specimen collected on 9 November 2021.

This variant has a large number of mutations, some of which are concerning. Preliminary evidence suggests an increased risk of reinfection with this variant, as compared to other VOCs. The number of cases of this variant appears to be increasing in almost all provinces in South Africa.

Current SARS-CoV-2 PCR diagnostics continue to detect this variant. Several labs have indicated that for one widely used PCR test, one of the three target genes is not detected (called S gene dropout or S gene target failure) and this test can therefore be used as marker for this variant, pending sequencing confirmation. Using this approach, this variant has been detected at faster rates than previous surges in infection, suggesting that this variant may have a growth advantage.