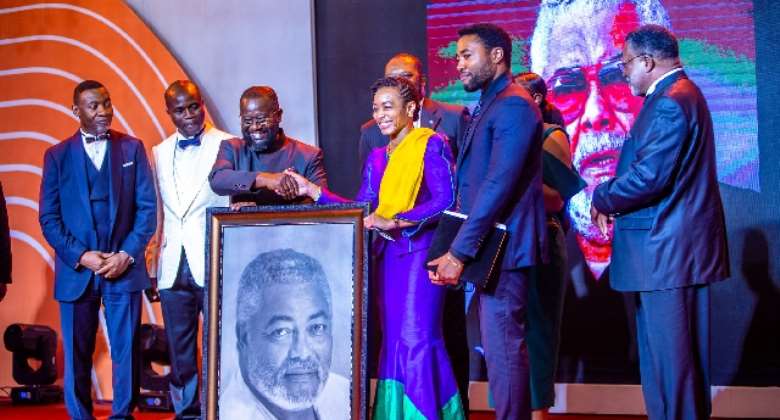 Dr Zanetor Agyeman-Rawlings, the Member of Parliament for Klottey Korle constituency and daughter of the late former President Jerry John Rawlings, has stated that her father’s vision did not die with his passing nor did it die with the end of his tenure in office.

The Klottey Korle legislator said President Rawlings’ legacy was not his alone but also for all Ghanaians.

“It is about building upon what we come to find because his legacy is not just his, it is for all of us, as is it for all Presidents subsequent – President Kufuor, the late President Mills, President Mahama and now President Nana Addo Dankwa Akufo Addo,” she said.

Dr Agyeman-Rawlings made the call when she, alongside her brother, Kimathi Agyeman-Rawlings, received the Lifetime Achievement Award posthumously awarded to President Rawlings for his invaluable contribution to the energy sector, at the recently held 5th Ghana Energy Awards at the Labadi Beach Hotel in Accra.

The Member of Parliament, who is also a medical doctor, took the audience through memory lane when she said the biggest drive towards the expansion of the grid and electrification happened under Chairman Rawlings’ watch, which started under the tenure of the PNDC.

She bemoaned the fact that “due to revisionism, a whole generation of young Ghanaians are blissfully unaware of the immense contributions that the late Jerry John Rawlings made towards establishing a solid foundation of power generation for Ghana. A foundation upon which all subsequent governments have benefitted and built upon.”

Former President John Agyekum Kufuor, who also received a Lifetime Achievement Award, was commended by Dr Agyeman-Rawlings for acknowledging the existence of structures that preceded his tenure in office.

To resounding applause, she said, “It is the foundation upon which all governments have built upon. We all have a duty to speak the truth about our history so that the younger generation can learn that we build upon what we come to meet.”

President Rawlings, Dr Agyeman-Rawlings disclosed, believed that it was empty rhetoric to attempt to change a country through a revolution if it had no means of generating sufficient power to sustain itself and develop its industries.

Dr Zanetor Agyeman-Rawlings recounted how in the mid-1980s, Chairman Rawlings having concluded that the contract between Ghana and VALCO, for the use of the country’s hydroelectric energy was not beneficial to Ghana, constituted a team led by Professor Akilakpa Sawyer to seek a review of the agreement.

“The key issues were that the correct value for the energy that was being consumed at the time be paid to the government of Ghana. As well as the fact that the presence of the Akosombo Dam could not only be for the purpose of a company and a few areas in the country but needed to be used to extend power to the rest of the country to ensure that all the citizens were benefitting from same. The rest is history,” the Klottey Korle MP said.

Dr Agyeman-Rawlings said, “the future of Ghana is energy and it is so encouraging to see we are going down the renewable path. Indeed, this preceded the COP26 so we are way ahead. Thank you very much for this opportunity, for this honour done him.”

The citation accompanying President Rawlings’ award recognized his untiring efforts in pushing the frontiers of energy in Ghana, his government’s initiation of the reform and restructuring of the energy sector, the diversification of the energy sector from solely hydro-electric generation to include thermal and the conceptualization of the participation of independent power producers through the Ghana Power Sector Development Policy.

“At a time when only ten per cent of Ghanaians had access to electricity, you committed yourself to extend access to the rest of the country through the ambitious national electrification scheme, a project that saw the VRA extend grid lines from Kumasi to Brong Ahafo, Northern and Upper regions and by taking over the distribution of electric power through its new subsidiary the Northern Electricity Department, to Northern consumers.

“This singular initiative helped to slow down rural-urban migration and boosted economic development in the newly supplied areas,” the citation stated.

President Rawlings was also commended for his foresight in the establishment of the Public Utilities Regulatory Commission (PURC), the Ghana National Petroleum Corporation (GNPC) and the Bulk Oil Storage and Transportation Company Limited (BOST).

President Rawlings was first contacted to receive the award by the then Chairman of the Awards Panel, Dr Kwame Ampofo in 2020, but he passed away shortly afterwards. The Awards Panel is now chaired by Mr Kwame Jantuah, whose late father was a renowned politician much respected by President Rawlings for his fearlessness in speaking the truth.