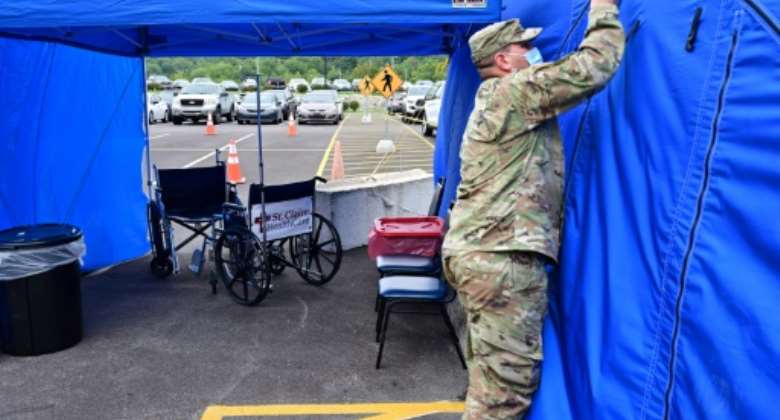 A National Guardsman erects a tent for Covid patients outside a hospital in Kentucky last month. The WHO is hoping that member states will come up with methods to prepare for the next pandemic, warning that 'the question is not if, but when'. By Jon Cherry (GETTY IMAGES NORTH AMERICA/AFP)

World nations gather Monday to thrash out whether to pursue a pandemic treaty setting out how to handle the next crisis -- which experts fear is only a matter of time.

The three-day meeting at the World Health Organization (WHO) in Geneva comes with the planet still besieged by Covid-19, nearly two years on from the first recorded cases.

The economic turmoil and millions of lives lost have triggered calls for new international defences strong enough to prevent a repeat disaster.

"We will have more pandemics in the future. The question is not if, but when," Jaouad Mahjour, the WHO assistant director-general for emergency preparedness, told reporters.

The World Health Assembly -- the WHO's decision-making body comprising all 194 member states -- is holding an unprecedented special session to consider developing a new accord on pandemic preparedness and response.

The meeting should conclude with a resolution on the way forward. The desired outcome -- whether a treaty or another formulation -- will come later down the line, potentially as far off as 2024.

But how far countries are prepared to go in agreeing binding terms on getting ready for the next outbreak, and effective systems for stamping it out, remains uncertain.

The existing International Health Regulations were simply not designed to handle pandemics on the scale of Covid-19, or ensure equity and preparedness, said Mahjour. Indeed, the word 'pandemic' does not even appear in the texts.

Though faster to enter into force, the scope for what can be done via regulations is far narrower than for a treaty.

WHO chief Tedros Adhanom Ghebreyesus wants a treaty to end the sorry cycle of "neglect and panic".

"The ongoing chaos of this pandemic only underlines why the world needs an iron-clad global agreement to set the rules," he said Wednesday.

The United States is thought to be less keen on talk of a treaty and more focused on agreeing content with rapid impact.

However, more than 70 countries so far are backing a treaty, the health ministers of 32 of them said in a joint article.

The ministers -- from nations including Britain, Chile, Germany, Italy, Kenya, South Korea, Spain, Thailand and Turkey -- said a treaty was "the only substantial proposal" that could ensure a "rapid, joint, effective, and equitable global response" to future outbreaks.

"We cannot wait for the next crisis before we act," they wrote.

Ensuring equitable access to vaccines, tests and treatments is a key special session issue for many African countries starved of tools to fight this pandemic.

"Whatever we do, we need a continued commitment at the highest political level in the future," one European diplomat said, adding: "We need a legally-binding instrument to structure this... it's too important."

Steve Solomon, the WHO's chief legal officer, told reporters there was "good reason to believe" a collective way forward could be found.

The Independent Panel for Pandemic Preparedness and Response, convened to rake over the failings in tackling Covid-19, reported its findings and recommendations in May. It proposed establishing a WHO framework convention.

Euitable access to vaccines is a key issue for many African countries starved of tools to fight the current pandemic. By Phill Magakoe (AFP)

Under that treaty format, the bulk of it could be agreed quickly and elements could then be added to the framework over time.

"This is not something that needs to be debated endlessly. Please get on with it," panel co-chair Helen Clark, the former New Zealand prime minister, said Monday.

Following the 74th World Health Assembly in May, a working group was set up to find common ground ahead of the special session. It is racing to finalise a draft resolution for the session to debate.

It is gearing towards proposing an intergovernmental negotiating body to start drafting and negotiating on the basis of the special session's outcome.

Mahjour said recommendations up for debate broadly fall into four categories: equity; governance and leadership; financing, at national and international levels; and systems and tools to respond to global health crises.

"There is some urgency... because the world cannot afford to have another pandemic for which the world is not prepared," said Mahjour.