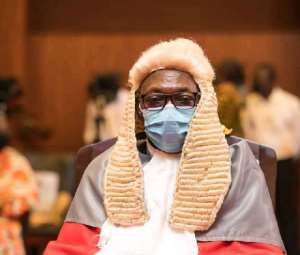 The President of the Association, Justice Henry Kwofie, told journalists in Accra that: “This allegation, which is being thrown around all over the place especially on social media, we find extremely malicious, unfounded, and we see it as a deliberate attempt to cause disaffection for Justice Honyenuga, to His Lordship, the Chief Justice, and the judiciary in general, and we take a strong exception, and we also see it as an attempt to scandalise the judiciary, and we take a strong exception to it.”

Justice Honyenuga was removed from the case but reinstated after Attorney General Godfred Dame filed a review application that overturned his prohibition.

A few weeks ago, the opposition National Democratic Congress (NDC), said the manner the Opuni-Agongo trial is proceeding does not convince Ghanaians that justice will be served at the end of the day.

A press statement issued by the party on Sunday, 14 November 2021, signed by General Secretary Johnson Asiedu Nketia said: “It is doubtful” whether “the trajectory” of the trial of Dr Stephen Kwabena Opuni, Seidu Agongo and Agricult with its twists and turns would convince the ordinary and well-informed citizen that the ends of justice would be served regardless of the outcome of the case”.

“We believe that such a course of conduct is appropriate because the action of the Attorney General in the past in escalating a simple criminal trial to the level of political gamesmanship with Dr Stephen Kwabena Opuni being mischievously presented as the poster child of NDC-government corruption who must be jailed by all means because ‘fair is foul and foul is fair’ make it abundantly clear that the criminal trial of the accused persons is not a criminal prosecution. Instead, it is political persecution by the Attorney General masquerading as an exercise in rule of law and criminal justice”.

Hottest Photo Reports
Catch up with all the political quotes from our politicians.
Advertise here
More Headlines
ModernGhana Links
The Clerks of Parliament walked me to my reserved seat in the Chamber but I opted for the public gallery — Asiedu Nketia
You’ve always made me proud as your wife – Lordina celebrates Mahama at 63
Court issues warrant for arrest of Xavier Sosu for 'disrespect'
Swiftly intervene to pull the country together amid majority, minority impasse – Adongo to Akufo-Addo
My presence in Parliament gingers, inspires NDC MPs – Asiedu Nketia
2022 budget: We're shocked, disappointed in Majority attacks on Bagbin – NDC caucus to majority
The days where you had majority to bully minority are over – Haruna Iddrisu jabs NPP MPs
Mahama clocks 63 today
You're an 'irresponsible' bunch for 'running away' from own budget; blame yourselves – Minority fights Majority
TOP STORIES

The Clerks of Parliament walked me to my reserved seat in th...
45 minutes ago

You’ve always made me proud as your wife – Lordina celebrate...
1 hour ago