By David Coffey with RFI
Uganda 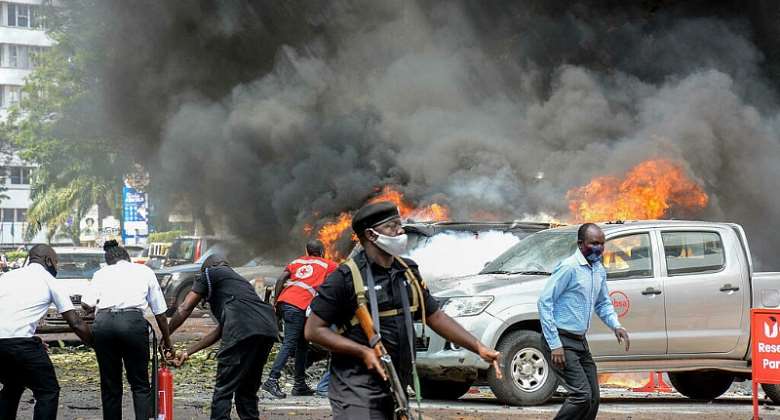 Ugandan police shot dead five suspects and arrested 21 people on Thursday as part of an investigation into twin suicide bombings claimed by the Islamic State group that killed four people.

Tuesday's explosions were the latest in a string of attacks in the country, which has tightened security and mounted an investigation into the bombings.

President Yoweri Museveni has vowed to defeat "the terrorists".

The attacks in the capital Kampala occurred within minutes of each other, with two suicide bombers on motorbikes disguised as "boda boda" motorcycle taxi drivers detonating a device near the parliament building, while a third attacker targeted a checkpoint near the central police station.

Ugandan police said the attacks were the work of "domestic terrorists" linked to the Allied Democratic Forces (ADF), an armed group operating in the eastern Democratic Republic of Congo that the United States has linked to the Islamic State armed group.

On Thursday, counter-terrorism officers killed "four suspected terrorists in Ntorokoe" in the west of the country, who were allegedly crossing back in to the DRC.

Meanwhile, a fifth man was reported killed outside Kampala as he tried to escape arrest. Police identified the man as Sheikh Abas Muhamed Kirevu, a known local Islamic leader who they allege was "responsible for re-awakening the terror cells in Kampala".

Police also say 21 suspects have been arrested as part of their crackdown on the ADF, which Kampala also blames for two attacks in October.

Last month police arrested a number of alleged ADF operatives and warned that extremists were believed to be plotting a new attack on "major installations".

The ADF, historically a Ugandan rebel group, has been accused of killing thousands of civilians in the eastern DRC.

President Yoweri Museveni is due to make a televised address to the nation this Saturday evening, in the wake of the deadly attacks.