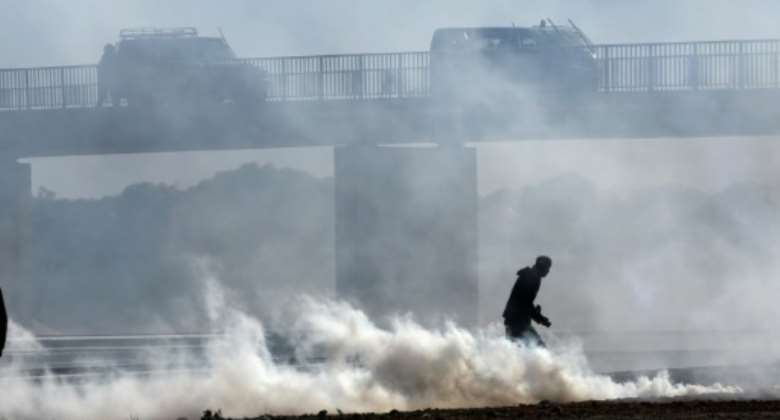 Smoke billows from tear gas fired by Tunisian security forces in the town of Agareb on November 11, 2021, two days after the death of a protester during angry demonstrations over the reopening of a rubbish dump. By ANIS MILI (AFP)

As tear gas and protest cries filled the air in the Tunisian town of Agareb, Mabrouka Ben Ibrahim vowed to demonstrate for her daughter, whose death she blames on a nearby rubbish dump.

Yousra, 21, died in 2019 after being bitten by a mosquito that came from the toxic trash site, Ben Ibrahim said.

"I lost my daughter and I don't want other families to lose their children because of the filth in this landfill," the 59-year-old said.

Residents say rubbish dumped at the site, including dangerous industrial and medical refuse, has caused a string of diseases from cancer to vision problems and infertility.

Authorities decided to close the site in September after declaring it full but reversed course on Monday, prompting angry street demonstrations that degenerated into clashes with security forces.

In the early hours of Tuesday, a protester died of what relatives said was tear gas inhalation, although authorities have blamed his death on an unrelated health condition.

The protests come amid a garbage crisis across Sfax province that has seen refuse piling up on pavements after the closure of the Agareb site, the province's main dump.

Residents say the site, around three kilometres (two miles) from the town centre and stretching over 35 hectares (85 acres), has become a public health disaster since it opened in 2008.

"Two years after it was opened, we started seeing an increase in allergies, respiratory diseases and miscarriages as a direct result of burning of trash and the release of toxic gases" from the site, said Bassem Ben Ammar, a doctor who has worked in the town for two decades.

"The number of cancer cases has shot up."

Even as the smell of tear gas dissipates, the stench of refuse still hangs over the town of 40,000.

"During the summer and throughout the year, the mosquitos and the disgusting smell never leave us. We can't even open our windows," demonstrator Adel Ben Faraj said.

The dump, situated in the middle of a nature reserve, receives more than 620 tonnes of waste every day, according to Ines Labiadh of the FTDES rights group. By HOUSSEM ZOUARI (AFP/File)

The dump, situated in the middle of a nature reserve, receives more than 620 tonnes of waste every day, according to Ines Labiadh of the FTDES rights group.

Ben Ammar said the site was a destination for "waste of all kinds, including medical waste, amputated body parts and even foetuses".

The environment ministry said medical waste was treated before going into the dump.

The site, one of 13 official landfills in the North African country, serves around one million people and receives waste from numerous factories in the city of Sfax, Tunisia's main industrial hub.

As in the rest of Tunisia, only a small fraction of the region's waste is recycled, with the rest either buried or incinerated.

Residents say the site was only meant to be active for five years, but its use was extended and it continued operating despite a judge ordering its immediate closure in 2019.

It was deemed full and finally shut down in late September, but authorities reopened it this week, triggering renewed outrage among residents.

Activists have warned that similar protests could easily flare over other landfill sites in Tunisia.

Labiadh told AFP that less than 10 percent of the country's waste was recycled.

"This is damaging public health and the environment" around landfill sites, she said, calling on the state to set up a functioning recycling system.

Many of the landfill sites are found in marginalised areas.

"Today there are demonstrations in Agareb, but tomorrow they could happen around dumps in the capital. No dump in Tunisia is immune," she said.

Maamoun Ajmi, a 29-year-old architect and part of the "Maneche Msabb" (I'm not a rubbish dump) art collective, displays his work depicting a rat eating part of the Tunisian constitution dealing with environmental rights. By PAUL RAYMOND (AFP)

"Some areas have clean air, while others are marginalised and deprived of basic rights."

In Agareb, some residents have been using art to campaign for a solution.

Maamoun Ajmi, a 29-year-old architect, is part of the "Maneche Msabb" (I'm not a rubbish dump) art collective.

He showed AFP two of his artworks -- one a portrait of Yousra as an angel, the other showing a rat eating the section of the Tunisian constitution dealing with environmental rights.

He was among activists who met with President Kais Saied in Tunis on Thursday to highlight the town's plight.

Ajmi told AFP the protesters had nothing to do with politics.

"We're just Tunisian citizens who want our right to a clean environment," he said.