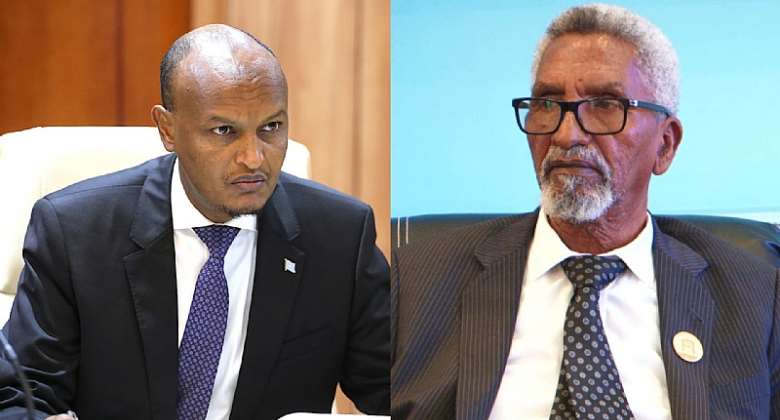 MOGADISHU, SOMALIA: Since war-ravaged and corruption-riddled country of Somalia adopted bicameral parliament in 2016 that usually contains two legislative chambers. Upper house and lower house of parliament, really it was thorny and uncharted trajectory in which Somalia had never navigated through and the draft provisional constitution adopted in 2012 does not disambiguate the exclusive and concurrent powers that each legislative chamber had. And how the joint and sensitive sessions may be chaired.

Somalia's constitution requires to be reviewed profoundly by constitutional law experts and undergone popular plebiscite or referendum for its approval. And the current constitution is not functioning properly. State institutions use the constitution either as pretext to circumvent and infringe the guiding principles or rubber stamp to approve their ulterior and sinister motives.

Let alone to implement check and balance and mutual accountability framework, as we have seen the speaker of the upper house also known as senate Abdi Hashi Abdullahi was alienated, Ostracized and shackled politically due to his assertive and unequivocal policy towards peace, human rights, corruption and federalism.

Somalia on monday it had officially initiated the long-awaited elections for the lower house of parliament with the election of two members who hailed from Somaliland who reside and work in Mogadishu, the Somali capital. Somaliland which describes and considers itself to be self-declared republic that seceded rest of Somalia on May,18,1991 and still grappling with to gain international recognition or universal accreditation from outside world.

Currently, Somaliland is a defacto state governing itself which means not legally recognized by the international community and the opposite is a dejure which means legally recognized the incumbent Somaliland authorities had vehemently censured those assuming high positions in the federal government of Somalia on behalf of Somaliland and described electors and electorates as selfish, Mercenaries and traitors whose main objective is to defame, vilify and tarnish the global image of Somaliland.

The two seats were bitterly contested by four candidates and the main flagbearer was the country's deputy prime minister Mahdi Mohammed Guled who was acting prime minister when Somali parliament unanimously voted no-confidence motion and ousted former prime minister Hassan Ali Khaire who served as a prime minister for three and half years until the current and caretaker premier is being nominated.

Deputy prime minister Mahdi Guled has garnered overwhelming votes in the election after he received 97 votes out of 101 votes and his rival candidate had so far received only 4 votes. The Somaliland election implementation team had officially declared Mahdi Guled Khadar to be the winner and becoming the first MP to be elected in the new federal parliament. The losing candidate had conceded the ignominious and humiliating defeat and congratulated Mahdi Guled and pledged to collaborate him seriously.

I am extremely exuberant that the house of the people's election have kicked off to a positive start today and I urge the other federal member states to commence holding parliamentary elections as soon as possible.

" I hope that the electoral process will be victories and inclusive " the federal electoral implementation team chairperson Mohamed Hassan Irro said.

The exact number of the voting delegates were 101 according to the political agreement that was signed and ratified by the political stakeholders and each candidate vying for the lower house of the federal parliament will be elected by the 101 delegates and the delegates will be selected through the serious collaboration with the civil society organizations, traditional clan elders and state governments, elections are also scheduled or slated to take place only two electoral constituency within every state down from the previous four.

The current Somali caretaker prime minister who was assigned to orchestrate, hold and spearhead the most controversial indirect polls. Mohamed Hussein Roble congratulated the two elected MPsfrom Somaliland to the incoming house of the people of the federal parliament and passionately exhorted other regional states to accelerate or speed up the election process.

Right now the ball is in their court the regional autonomy. No more deferral or postponement Roble said rigorously.

The 54 member Senate and the 275 members of the parliament from the lower house are expected to jointly elect a new president later this year or early 2022.

This year's election will be offered the utmost priority which will be the third since Somalia gained its first internationally recognized government after the brutal civil strife that annihilated the country and its nations diametrically and nothing remains intact so far and everything was either ransacked or vandalized by myopic, selfish, unscrupulous thugs and ruthless marauders affiliated with barbaric warmongers and kleptocratic politicians.

Delegates selecting MPs or lawmakers will be the biggest number of electors since 2012. On the other hand political analysts had censured today's election and described the most rigged and fraudulent election ever conducted after the term of the incumbent federal parliament expired.