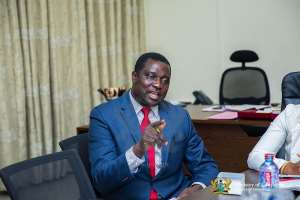 The Minister of Education, Dr Yaw Osei Adutwum, has charged Metropolitan, Municipal and District Assemblies (MMDCEs) to be innovative in their operations to help the New Patriotic Party (NPP) break the 8 year election cycle.

He explained that, for the New Patriotic Party (NPP) to break the eight-year election cycle, a lot depended on the performance of the MMDCE's and therefore urged them to work extra hard to ensure victory for the party in the 2024 general election.

Speaking at the ongoing orientation for MMDCE's at the Accra International Conference hall on Tuesday, Dr Adutwum said, "you have a critical role to play to determine who wins the next general election in 2024".

He explained that "your development initiatives, interactions and other innovations you promote in your operational areas will go a long way to bring the much development that the people expect from us all".

He lauded the MMDCE's for their role in the development of the country as they led the nation's development agenda.

Dr Adutwum said, 'it is true that Free Senior High School (FSHS) was introduced by a political party, the initiative does not need to be politicized at all since it is what the nation derived from its implementation that matters".

The Education Minister who is the Member of Parliament for Bosomtwe, reminded the MMDCEs to be proactive in their operations at all times by visiting communities and schools to have first-hand information about the state of affairs.

He charged the MMDCE's to see education as a very crucial tool that stood the chance of turning around the nation's development on time since it held the key to the development of every facet of the economy.

The Education Minister again urged the MMDCE's to support the development of education in their areas to enhance the general development of the nation.

He assured them that the government was keen on promoting the development of quality education across the nation irrespective of religion, ethnicity, social, political and other affiliations to enhance the total development of the various facets of the economy.