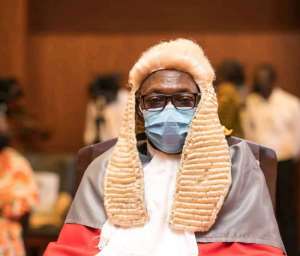 A seven-member Supreme Court has granted a review application by the Attorney General (AG) which sought to set aside the court's earlier decision barring Justice Clemence Honyenuga from continuing as Judge in the trial of former COCOBOD CEO, Dr Stephen Opuni.

Lawyers for the embattled former COCOBOD CEO had challenged the impartiality of Justice Clemence Honyenuga at the Apex court contending that the judge breached his right to fair hearing and that the judge had demonstrated bias against him.

The court in its July 2020 3-2 decision ruled in favour of Mr. Opuni restraining Justice Clemence Honyenuga from being the trial judge of the case in which the former COCOBOD Dr. Opuni and Managing Director of Agricult Ghana Limited, Seidu Agongo, are on trial for allegedly causing financial loss to the state to the tune of GH¢217,370,289.22

The AG sought a review of the Apex court's decision to restrain Justice Clemence Honyenuga arguing the ruling contained fundamental errors of law that manifestly resulted in miscarriage of justice.

The Supreme Court on October 12 heard the AG's review application with an additional 2 judges to the initial 5-member panel.

The court in its 4-3 Tuesday ruling on the matter said the AG's application succeeds.

The Minister of Justice and Attorney General, Mr Godfred Yeboah Dame, had said that the ruling of the highest court of the land stopping the case against former COCOBOD CEO Stephen Kwabena Opuni, businessman Seidu Agongo, and Agricult Ghana Limited, contained fundamental errors.

According to him, the fundamental errors occasioned a miscarriage of justice. To that end, he said in his statement of case filed at the Supreme Court registry on 18 August 2021the judgement ought to be reviewed.

He asked the Supreme Court review panel “to make a deep introspection into the soundness of the decision of the Court dated 28 July 2021 and correct the errors contained therein”.

The apex court by a majority decision granted the application of Dr Opuni, for the Supreme Court Judge sitting in as additional High Court Judge to abandon the trial.

The three-two Majority also quashed the decision of the trial Judge for rejecting exhibit lawyers of the former CEO submitted to the court.

The application which was initially filed at the High Court was a motion on notice for the trial Judge, Justice Clemence Jackson Honyenuga, to recuse himself.

A second application, which was filed at the Court of Appeal was a repeat application for a stay of proceedings pending the determination of an Appeal at the High Court.

The parties in the matter filed the repeat application after the High Court dismissed their initial application to stay proceedings pending an Appeal.

The High Court ordered Dr. Opuni and Seidu Agongo, the Chief Executive Officer of Agricult Ghana Limited to open their defence after the State had established a prima facie case against them.

Justice Clemence Honyenuga , in his ruling on a submission of no case, said the prosecution had succeeded in proving the essential ingredients in the charges levelled against the accused persons except for three charges on money laundering.

Dr Opuni, the first accused person was asking the trial Judge to refer the suit to the Chief Justice for reassignment to another Judge.

According to Dr. Opuni, the first accused said the motion was on the grounds of breach of Article 19 (2) (e) & (g) of the 1992 Constitution and for real likelihood of bias and asked the trial Judge to refer the suit to the Chief Justice, amend same for it to be “re-assigned to another judge on the grounds as contained in the accompanying affidavit.”

The former COCOBOD CEO, said the Judge stated in open court that he had to complete the case quickly to enable him concentrate on his duties at the Supreme Court as the case had been pending for the past three years thereby affecting his work in the Supreme Court.

The first accused said the learned Judge, having stated in open court that he was in hurry to hear the case, such that he refused to give him an additional four days to enable him adequately prepare for the case.

Justice Honyenuga after hearing the parties said “in view of the filing of an application to recuse myself from hearing the matter and also the pendency of a repeat application at the Court of Appeal, the trial is adjourned to June 9, 2021.”

Dr Opuni and Seidu Agongo are facing 27 charges including defrauding by false pretences, willfully causing financial loss to the State , money laundering, corruption by public officer and contravention of the Public Procurement Act.

They have both pleaded not guilty to the charges and are on a GH¢300,000.00 self-recognizance bail, each.

But the ruling of the Supreme Court suggests that the case will have to start all over under a new trial judge.

Latest Photo Reports
Catch up with all the political quotes from our politicians.
Advertise here
More Headlines
ModernGhana Links
Thank you for the wonders of Ghanaian culture, tradition — South Africa's Ramaphosa to Akufo-Addo
Park your car if you don't want to be vaccinated — Dr John Nsia Asare to drivers
Ashantis like NDC; we will target 40% votes in 2024 – Kwabena Duffuor
You told Ghanaians we are not in normal times so why impose elegy? — Group questions Akufo-Addo
PHOTOS: Hundreds of workers stranded at Lapaz as commercial drivers begin strike
Joe Wise rejects Minority’s claims of bias
‘Don’t travel outside this month’ – Nana Addo ban Ministers and deputies who’re MPs
Akufo-Addo to launch 2021 Anti-Corruption Week
Kumasi fast losing its agrarian lands, farmers forced to plant in containers
TOP STORIES

Park your car if you don't want to be vaccinated — Dr John N...
10 minutes ago