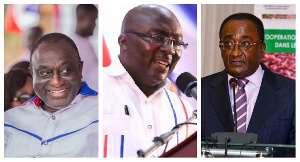 The President of the Republic, H.E Nana Addo Dankwa Akufo-Addo has commended Vice President Dr. Mahamudu Bawumia and other members of his government who are eager to lead the NPP have put their Presidential ambitions behind them and focused on their respective roles.

With the President now serving his last term in government, the New Patriotic Party (NPP) government will in 2023 go to the polls to elect a new flagbearer.

Although the process for the election has not been opened, there are rumours Vice President Dr. Mahamudu Bawumia, Agric Minister Owusu Akoto Afriyie, and Trade Minister Alan Kyeremateng are all interested in leading the NPP in the 2024 general elections.

Amid fears that the aforementioned and other appointees in the government with similar ambitions have been distracted from concentrating on their jobs, President Akufo-Addo has shot down the public notion.

According to him, Dr. Bawumia and the others are still committed to the work they have been given.

“I have no evidence that people’s ambitions are interfering in the work I have given them. I continue to see people committed and working. Owusu Akoto, Alan Kyeremanten, Dr. Bawumia they are working very hard and we are seeing the fruits of their work. They are comporting themselves and I’m impressed,” President Akufo-Addo said in an interview on Peace FM on Thursday, October 21, 2022.

Meanwhile, in the process to elect his successor, President Akufo-Addo as charged the leadership of the NPP to ensure there is fairness and transparency.

The president notes that he is confident the NPPs process in 2023 will bring someone that will unit the party.