African envoys head to Eswatini as another protester killed 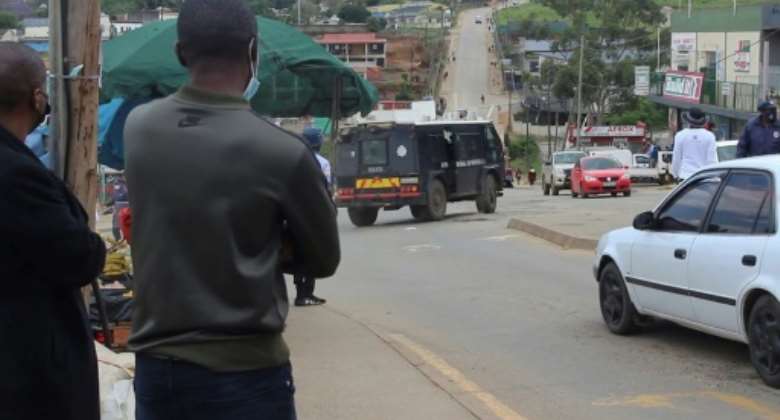 Hundreds of soldiers and police fired teargas at even small gatherings of people and unleashed volleys of rubber bullets. By - (AFP)

One person died and at least 80 people were injured in pro-democracy protests in Eswatini Wednesday, a union leader said, as African nations deployed envoys to try to stem the unrest.

Gunfire was heard into the night in the capital Mbabane, and the civil servants' union NAPSAWU said at least one man had been shot dead earlier in the day.

"The army and the police killed one person at about 3pm today," union president Oscar Nkambule told AFP.

Fifty of its members were taken to hospital in the capital Mbabane, with another 30 hospitalised in the city of Manzini, including some with gunshot wounds, he added.

At least 50 people were taken to hospital, said the union leader. By - (AFP)

Hundreds of soldiers and police began fanning through both cities early in the day, firing teargas at even small gatherings of people and unleashing volleys of rubber bullets, an AFP correspondent saw.

The kingdom -- formerly known as Swaziland -- again shut down the internet as images of the violence began circulating on social media.

Ramaphosa currently chairs the security organ of the Southern African Development Community. The statement said Ramaphosa had ordered high-level envoys to fly to Eswatini to meet the king on Thursday afternoon.

'A recipe for war'

Nkambule told AFP that the violence began around 7:00 am (0500 GMT) and accused security forces of firing teargas into a bus carrying protesting workers.

Videos shared online showed people jumping from the windows of a bus enveloped in white gas.

The Internet went offline at noon, as students, transport workers and civil servants extended protests that have ground the tiny nation to a halt for more than two weeks.

"This is a recipe for war," said Wonder Mkhonza, head of the Amalgamated Trade Union of Swaziland.

"The king is fighting for a war, he is making the country ungovernable by deploying the armed forces."

The Internet shutdown made it difficult to share information about the protests, or to alert the families of the wounded and dead.

Heavily armed soldiers and police were seen on the streets, while one Mbabane high school caught fire, sending plumes of smoke billowing over the city.

At least 29 people have now died this year as police clashed with protesters in some of the worst unrest in the southern African country's history.

King Mswati III has ruled this landlocked nation since 1986 and owns shares in all of the country's telecoms.

He is criticised for living a lavish lifestyle in one of the world's poorest countries and is also accused of stifling political parties.