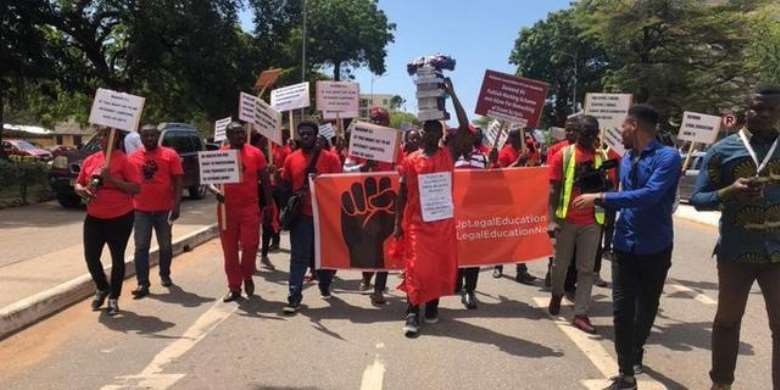 The National Association of Law Students (NALS) on Wednesday, October 20, 2021 hit the streets to express their grievance over alleged denial of entry into the Ghana School of Law.

However, a press release subsequently issued by the GLC indicated that 790 candidates out of a total of 2,824 students who sat for the 2021 entrance exams passed.

In the reaction from candidates that sat for the exams, some 499 students have expressed displeasure over the press release from the GLC.

The students argued that they attained the pass mark but were deliberately failed.

Later, it was explained that the rules of the exams changed this year and so candidates had to score at least 50% in both sections.

But the failed students insisted that the new rule was not communicated to them.

After weeks of no positive outcome, candidates have today hit the streets of Accra as they yielded placards with bold inscription of their demands.

Among many other things, the failed students are calling on government is see to it that there is proper reform at the Ghana Law School to put an end to the annual clash between students and management over mass failure in the entrance exams.

One Teacher One Laptop: Teachers Alliance to demonstrate on ...
13 minutes ago