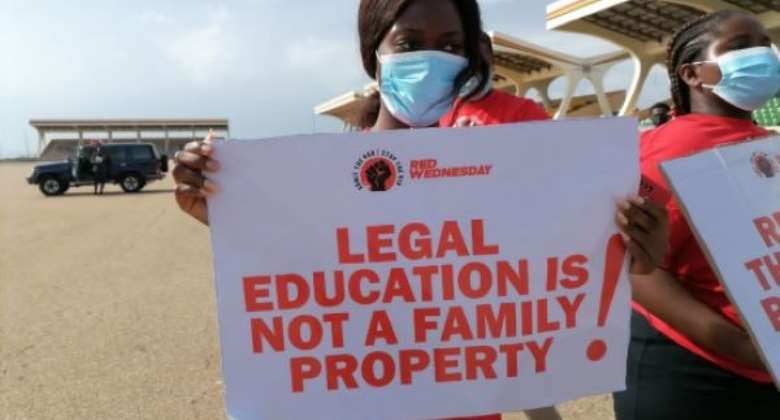 Some aggrieved law students belonging to the National Association of Law Students (NALS) who failed in their entrance exam to the Ghana School of Law, have demonstrated today, 20 October 2021, to demand reforms in the country’s legal education system.

They are blaming the General Legal Council for their failure.

They presented a petition to parliament and the seat of the presidency.

The march is in support of some 499 students who recently failed to make it to the Ghana School of Law.

In the first week of this month, some of the 499 students petitioned the independent Examination Committee of the General Legal Council, to have all those who made the overall 50 per cent pass mark but were failed for not crossing the 50 per cent mark in one of the two sections of the exam, gain admission to the Ghana School of Law.

The aggrieved students, in their petition, argued that failing them per the new directive, amounted to implementing a quota system, which has resulted in 499 of them being denied professional legal education.

“We, therefore, believe this notice, issued under the hand of Mr Kwesi Prempeh-ECK, is an anomaly and must be discarded to preserve the sanctity of your respected committee, as well as its well-established marking scheme, until it is properly reviewed and appropriately communicated for observance and compliance.”

“All rules and guidelines governing the conduct of the exam must be clearly communicated prior to students sitting the paper and not after the release of exam results, as has just been witnessed.”

Mr Sosu, who is the Deputy Ranking Member of the Constitutional, Legal, and Parliamentary Affairs Committee of Parliament, insists the results must be investigated to ascertain whether or not the results are genuine.

“Article 37(1) of the 1992 Constitution provides that the State shall endeavour to secure and protect a social order founded on the ideals and principle of freedom, equality, justice, probity, and accountability as enshrined in Chapter 5 of this Constitution; and in particular, the State shall direct its policy towards ensuring every citizen has equality of rights, obligations, and opportunities before the law”, he said.

“As such, there is the need for investigations to ascertain whether or not the pass rates and scores are based on the actual performance of students during examinations, or as a result of lack of available infrastructure to accommodate the excess numbers, hence this petition.”

Meanwhile, the SRC of the Ghana School of Law has called for a national dialogue on the matter.