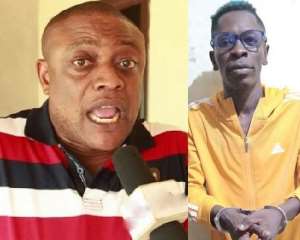 According to him, the artiste known in private life as Charles Nii Armah Mensah turned himself in after news got to him that two of his boys have been arrested in connection with the publication of false information to cause fear and panic on social media.

He said the impression created by the police that Shatta Wale was arrested was erroneous and must be corrected.

According to the private legal practitioner, he advised Shatta Wale to turn himself in when the dance hall artiste called him seeking legal advice.

“So, let not the police create the impression as if the artiste was arrested as has been portrayed in the traditional media and social media platforms,” he said.

“It is high time the police hierarchy desist from some of this misinformation in the media,” he added.

Maurice Ampaw noted that what Shatta Wale did by faking his shooting may be considered a crime but it was an act to expose a crime.

He contested one can in certain circumstances commit a crime to expose a crime just like what, Ace investigator Anas Aremeyaw Anas has been doing as part of his expose’s on corruption in the country.

Lawyer Maurice Ampaw made this assertion on Accra-based Neat FM.

You cannot preach e-Levy when gov’t appointees continue in s...
52 minutes ago