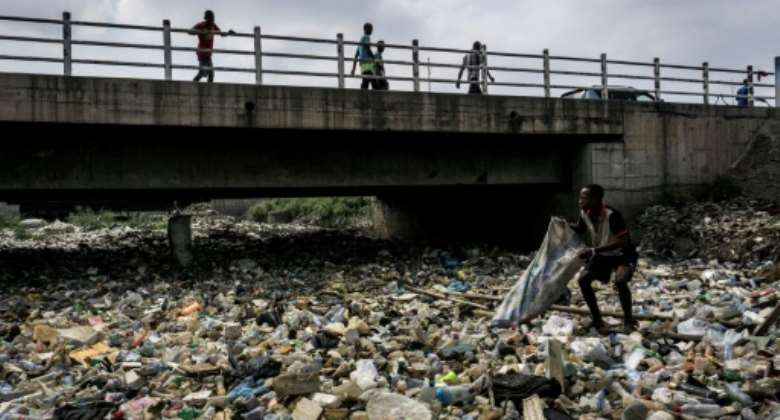 Plastic bottles completely cover the water line on the Kalamu River which runs through the centre of Kinshasa. By JOHN WESSELS (AFP/File)

A basin of plastic waste on her head, Jeanne Bopena places it on the scales. They show six kilos. Smiling, she comes out with 1,500 Congolese francs -- or 75 US cents.

"Today, I didn't sell much," says the 39-year-old mother of two. "Since this factory opened, I come to sell them all kinds of plastic waste. It helps me to feed my family."

Beneath the large hangar of the Clean Plast company in Kinshasa, about 20 men wearing green T-shirts and red gloves sift through the waste and sort it by type of plastic and colour.

A teeming city of at least 12 million people, the capital of the Democratic Republic of Congo is notorious for heaps of garbage and rivers choked by plastic bottles. So much so that its nickname "Kin the beautiful" has turned to "Kin the trash can".

"We collect, we treat, we recycle all types of plastic waste from Kinshasa, with the objective of cleaning up the city," says Alexander Bamanisa, managing director of the company established in 2018.

Located in the working-class and deprived neighbourhood of Kingabwa, Clean Plast employs about 100 people and its plastic recycling plant is still operating "at only 20 percent of capacity", according to technical director Jagdeep Pandya.

In partnership with Kinshasa City Hall, the company has set up 15 plastic waste collection sites in the city, taking in about 10 tons every day.

The goal is to set up at least two sites in each of the capital's 24 communes and collect 4,000 tons of waste per month, says Bamanisa.

Like Bopena, other local residents come to sell plastic waste in relatively small amounts that they carry by hand or push on carts.

Behind the factory, a huge pile of waste has been brought in by vehicle.

Everything is there: bottles, bags, chairs, tables, cans, dolls.

In the enclosure, mountains of compacted plastic bottles stand next to giant bales of crushed waste.

On the right side of the plant, a worker operates a shredder. Another dumps bags of new plastic bottles into a compactor.

"This is factory waste sent in by a local manufacturer. We have partnerships with major plastic manufacturers. They send us their waste, and we make reclaimed material from it," Pandya says.

"Our goal is to have a range of 100 percent recycled products made in Kinshasa," adds Bamanisa.

The crushed and compacted materials are in turn driven on a metal conveyor belt to the cleaning plant.

They are then melted and poured into a granulator. Depending on the colour, the regenerated material is placed in white bags and stored, ready to be sold to the plastic manufacturing industry.

In Kinshasa, there have been many private initiatives by environmental protection organisations, but the problem has not been solved.

From 2008 to August 2015, the European Union had injected $1 million a month into a project to dispose of household waste.

Since then, only a few garbage cans have been installed in some neighbourhoods of Kinshasa, where 9,000 tons of waste are produced daily, according to the city council.

"It was important for us to contribute to finding a sustainable solution to this waste management problem," says Bamanisa.