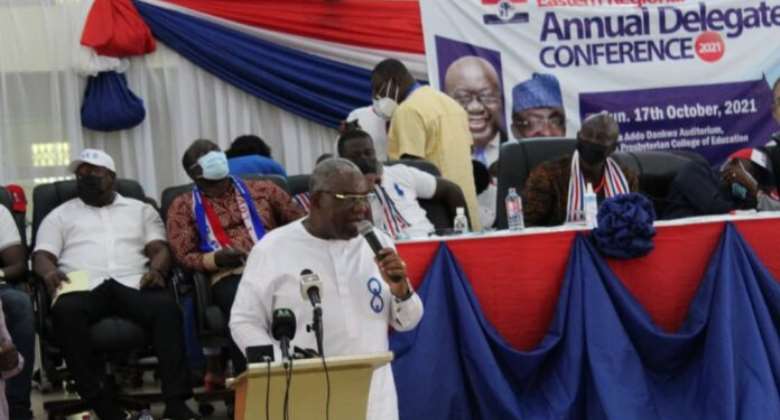 A former Energy Minister, Boakye Agyarko has admonished the New Patriotic Party (NPP) to work towards towards election 2024.

He said the NPP must stay in power for the next 60 years.

According to the economist and politician, the governing party must not only target breaking the 8 but must look beyond staying in power for decades to come to emulate the Japanese Liberal Party and the PRI of Mexico.

“…so after breaking the 8, then we hand over power to NDC? absolutely not. My intention for this party is to become the dominant political force in the political space. So that there would be no challenger to the NPP in any election that we go.

“So that every election, election after election we will continue rule. The Japanese Liberal Party has been in power for 54 years, the PRI of Mexico has ruled for 71 years so NPP ours must be 60 years,” Mr. Boakye Agyarko said at the NPPs regional delegates conference in the Eastern Region.

President Akufo-Addo will complete his eight years in government.

As usual, a new government always takes over after the 8year term of the ruling government.

However, there are already campaigns for the elephant party to continue to stay in power beyond the 8year electoral cycle.

At the regional delegates conferences of the NPP in the various regions last week, branded T-shirts of breaking the 8 were displayed.

More is expected to be seen at various upcoming gatherings of the NPP.

Hottest Photo Reports
Catch up with all the political quotes from our politicians.
Advertise here
More Politics
ModernGhana Links
Just reduce fuel prices; the plenty talks are unnecessary – Adaklu MP to gov’t
Revisions to 2022 budget not concessions – Jinapor
E-Levy: No amount of talks or reduction is needed; just scrap it – ASEPA to Ken Ofori Atta
I’ve written to Bagbin on some amendments to 2022 budget – Ken Ofori-Atta
Lead by example, don’t also travel abroad for one month – Ablakwa tells Akufo-Addo
Rawlings wanted me to run against Mahama in 2018 but I refused – Duffuor
'Bawumia, the weak cedi is running; arrest it as you promised' – Duffuor
‘Accusing us of corruption, compromise in negotiations with Majority wrong’ – Ayine
Tidal waves: Minority’s call for budgetary allocation merely for political gains – Agyapa Mercer
TOP STORIES