Energy-stricken S.Africa weighs need to save climate and keep lights on 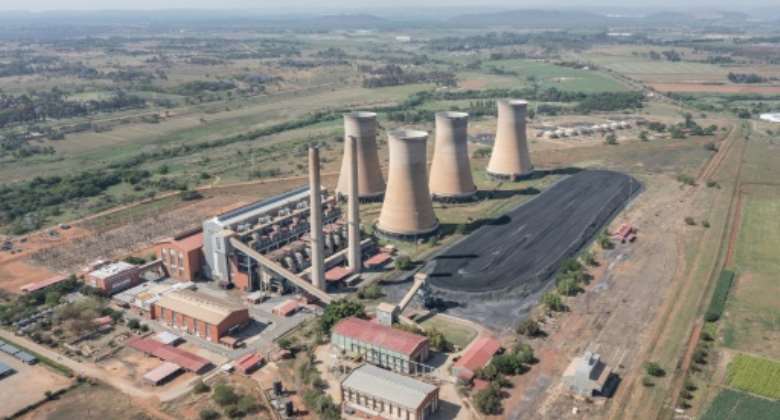 When you fly into Johannesburg, solar panels seem to gleam everywhere, from the roofs of mansions and small township homes alike.

Like many developing countries, South Africa is struggling to meet growing energy needs yet avoid deepening Earth's carbon crisis -- one of the many dilemmas besetting the UN climate talks, which resume in Glasgow on October 31.

South Africa's continuing addiction to coal has to be seen in the context of rolling blackouts that have been a part of life since 2007.

Schedules for power cuts are shared on apps and in news reports, along with quotidian news like weather and traffic jams.

"As a young South African I am scared," environmental activist Ditebogo Lebea said during a webinar organised by the think-tank South African Institute of International Affairs. "Our country is facing an energy crisis that needs urgent attention."

The power cuts are a headache for residents and disastrous for businesses, undermining efforts to bring down a 34 percent unemployment rate.

The government sifted through every conceivable solution to try to resolve the problem.

Steep discounts -- up to 100 percent -- were offered for homes to adopt solar water heating. Wind farms sprouted up. A desert blossomed into Africa's largest solar farm.

But the country also decided to build not one, but two gargantuan coal-powered plants, each producing about 4,800 Megawatts.

Operating as a unit, they will form the biggest coal power complex in the world, topping even China's massive coal expansion.

By comparison, the solar farm produces 50 megawatts of power.

The first new plant has come online in fits and starts, dogged by design flaws and corruption at the state power company Eskom. The second is still under construction.

Yet South Africa enjoys 2,500 hours of sunshine per year on average -- around 600 more than solar power champion Germany.

"Everyone acknowledges renewable energy is a massive opportunity in South Africa," said energy analyst Argon Poorum of the non-profit GreenCape.

The country has tried to tap that opportunity.

Chaos in energy policy was fuelled by former president Jacob Zuma, who took office in 2009.

He tossed out solar plans and tried to negotiate a back-channel, one-trillion-rand (67-billion-dollar) nuclear energy deal with Russia.

That plan was thwarted by activists, the opposition and a rebellion within Zuma's own cabinet, but the damage was done.

Greenhouse gases rose 10 percent from 2000 to 2017, according to government figures.

Zuma's successor Cyril Ramaphosa is steering a new course. He revived the renewable energy scheme last year, and made it easier for companies to generate their own solar and wind power.

Nuclear remains part of the mix, and three licences have been approved for floating power plants that use natural gas,a fossil energy that is far more fuel-efficient than coal.

Eskom has meanwhile set out to gradually decommission old coal plants over the next three decades, aiming to balance the new plants' emissions.

But the government is hoping to secure financing at COP26 to finance Eskom's migration away from coal.

One goal of the conference is to get rich nations to follow through on pledges to raise at least 100 billion dollars a year to help developing countries shift to green energy.

South Africa wants a slice of that money, which could go a long way toward filling gaps in domestic funding.

"We have left it too late," said energy expert Chris Yelland. "But better late than never."