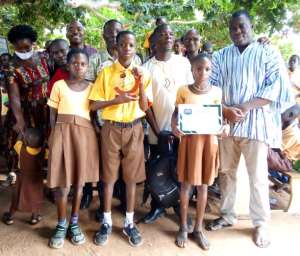 Mr Elli Samuel Wemegah, the Assemblymember for Ahlihadzi Electoral Area in the Akatsi Municipality of the Volta Region has organised a quiz competition for basic schools in his area.

The move was to improve the reading and learning habits of the pupils.

Contestants were asked questions from subjects such as English language, Mathematics, Science and Current affairs or Social studies.

Asafotsi basic school won the competition with 68.5 points followed by Awasive and Ahlifedo basic schools with 39 and 37 points respectively.

Participants from various schools were given boxes of books, pens, plaques and certificates after the competition.

Mr Wemegah, the Assemblymember stated that the initiative was to take educational activities in his area to a higher level.

He told ModernGhana News that an Accra based ManLand roofing company was the main sponsor of the quiz competition.

"I am proud to say that,this is just the beginning of great things to come since l pledge for the competition will continue every year," he added.

Mr Eric Dogbey Kwame, the headteacher of Asafotsi Basic School applauded the Assemblymember for the gesture and urged him to do more.

He also appealed to government to address the numerous problems schools are facing in the area to improve the quality of education.

Mr Joseph Gbeti Azameti, Zikpitor of Awasive community who spoke on behalf of chiefs and people of the area thanked Mr Wemegah for the gesture.

"I promised you Mr Wemegah of your seat in the next assembly election," he said.

Present at the occasion were chiefs and elders, headteachers, teachers, students and many others.