Husband of slain Kenyan running star Tirop due in court 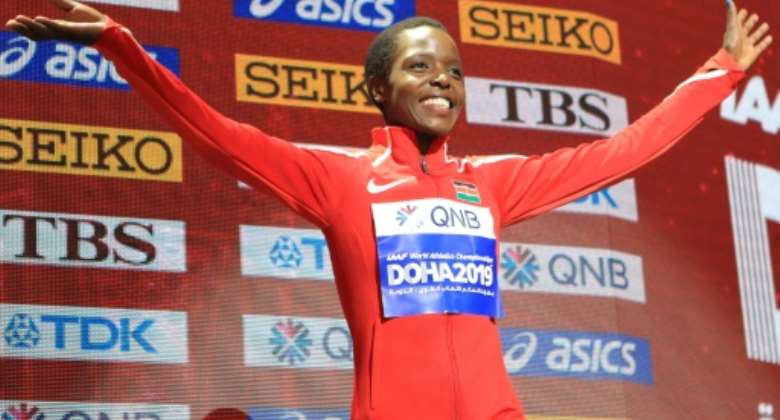 The 25-year-old double world championships medallist and Olympian has been hailed as a rising star cut short in her prime. By MUSTAFA ABUMUNES (AFP/File)

The husband of Kenyan double world championships medallist Agnes Tirop, who was stabbed to death in a killing that has shocked her home country and the world of athletics, was due in court Friday after a dramatic late-night arrest.

Emmanuel Rotich was detained in the coastal city of Mombasa on Thursday over the death of the 25-year-old at their home in Iten in western Kenya.

"He had fled from Iten where he is suspected to have committed the offence... At the time of the arrest, he was with one of his friends who is also in custody," local police commander David Mathiu told a press conference.

"An investigation is going on... and the suspect will be arraigned in court soon."

A senior police official in Mombasa told AFP that prosecutors were likely to ask for more time "to firm up a case" during the hearing.

"Given how tense the ground is in Iten, it is unlikely we will have him charged there," the official said.

Police cornered Rotich in Mombasa, using his mobile number to track him down after he used his old SIM card in his new phone after spending days offline, one of the investigating officers told AFP.

Tributes have poured in for Tirop since her body was found with stab wounds in the bedroom of their home in Iten, a high-altitude training hub in western Kenya for many top-class athletes.

Athletics Kenya said it was postponing events for two weeks in honour of Tirop and another runner who was found dead at the weekend of an apparent suicide.

Athletics Kenya president Jackson Tuwei said Tirop's death was a "huge blow" to athletics, describing her as "one of the fastest rising stars" and voicing hope for speedy justice.

Tirop was killed just a month after she smashed the women-only 10 kilometres world record in Germany.

She had previously won world championship medals and finished fourth in the 5,000 metres at the Tokyo Olympics this year. In 2015 she became the second-youngest gold medallist in the women's cross country championships.

Born to a peasant farming family in the sleepy town of Kesses in the Rift Valley, Tirop started her athletics career less than a decade ago but swiftly earned a reputation as one of Kenya's brightest stars.

Her family told reporters she was their breadwinner, paying for children's school fees and clothes.

President Uhuru Kenyatta paid tribute to Tirop, who would have turned 26 later this month, saying she had "brought our country so much glory through her exploits on the global athletics stage".

Macharinyang, 35, had competed for Kenya in both cross country and 5,000 metre and 10,000 metre races. He won three consecutive titles in the World Cross Country Championships from 2006 to 2008.