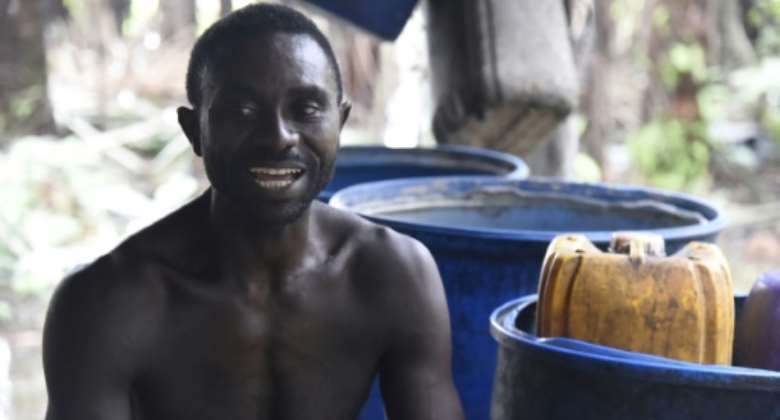 Wilson Ovwiroro taps raffia trees for their sap -- the source of a gin-like drink he makes called ogogoro. By PIUS UTOMI EKPEI (AFP)

Every morning, Wilson Ovwiroro leaves home early to paddle a wooden canoe into thick rainforest in southern Nigeria, where he taps raffia trees, making palm wine from their fermented sap.

The 50-year-old tapper also distils the alcoholic juice into a kind of gin known locally as "ogogoro" or "Sapele water," named after the nearby town where it reputedly originated.

Once the delight of traditional ceremonies, the local beverage is suffering a decline in popularity, battered by modern breweries.

With more than 200 million people, Nigeria is Africa's most populous nation and a huge market for beer.

Ovwiroro paddles out every day to collect the bounty from his trees. By Pius Utomi EKPEI (AFP)

The competition may seem unequal, but small-scale tappers and brewers like Ovwiroro still hope to keep their local beverages alive.

"I have been doing this work for 30 years. I started in Ondo state, came to Edo and spent 10 years before coming to Sapele here where I have now spent 15 years," Ovwiroro told AFP inside a wooden shed, which also serves as a mill for the father of eight.

The tapper learnt the skill from his father, and said his wife and brothers assist him in the job.

Ovwiroro attaches a container to a cut in the tree trunk to collect the sap, which is sweet and non-alcoholic in its unfermented state. By Pius Utomi EKPEI (AFP)

"I produce original ogorogo here. When you drink it, you know it is original. I don't mix it with ethanol. My own is the real special one. When I cook it, even rich people buy from me," he said.

The alcoholic content of ogorogo is unknown, although one glass, say those who drink it, is enough to make you feel intoxicated.

Ovwiroro also claimed the drink, which is often infused with herbs, had medicinal properties although he offered no evidence.

"When you drink it, you don't get infections. It cures malaria and fever," he claimed, sipping from a cup of fresh palm wine.

Ovwiroro and his makeshift distillery. By Pius Utomi EKPEI (AFP)

Ovwiroro said that he boils palm wine over firewood and distils it to make ogorogo, letting it cool before pouring it into jerry cans.

But he admitted that the job was "strong" -- tough work -- adding that he usually climbs at least 30 trees everyday.

Make mine an ogogoro: The beverage is often infused with herbs that are said to have medicinal benefits. By PIUS UTOMI EKPEI (AFP)

"I won't allow my children to do the work because it is too strong."

Ovwiroro wants the government to assist local tappers and brewers to expand their business, adding that the plantation from where he taps was on lease.

"I acquired this place last year. I pay 3,000 naira monthly to the community. I used to tap from another forest but the trees are no longer producing."

Kingdom Adugbo delivers his verdict after sipping from a glass of ogogoro. By PIUS UTOMI EKPEI (AFP)

Ovwiroro said the government should encourage investments in local gins.

"This is what we take to clear all our sicknesses and diseases away," claimed Kingdown Arugbo, a 66-year-old businessman who said he had been taking the local speciality since he was born.

He added that lovers of good and strong spirits should come to Sapele to taste local brews.

"If any company from abroad wants it they should come to us and we will give them the well-brewed original ogogoro from the source."

Park your car if you don't want to be vaccinated — Dr John N...
19 minutes ago