It's all in the eye: Tunisia's veteran photographer Jacques Perez 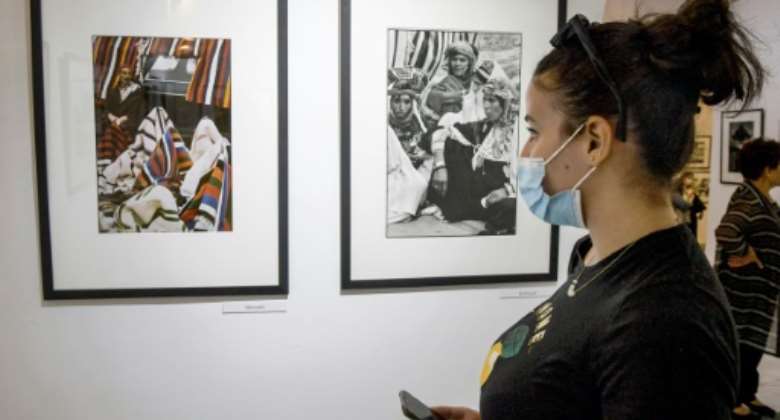 A visitor views the works of Tunisian photographer Jacques Perez during the launch of his exhibition "Memories before Oblivion". By FETHI BELAID (AFP)

"It's the eye that makes a photograph, not the camera," says 90-year-old Jacques Perez, who has forever retained his curiosity for his homeland Tunisia.

An exhibition of his work named "Souvenirs d'Avant l'Oubli" (Memories before Oblivion) is being held until the end of October in a palace in the medina of Tunis, the old city where he was born and still lives.

Perez said he began photography at the age of 11 or 12: "I was lucky to have a German mother and an Italian grandmother who gave me illustrated magazines" and educated his eyes.

Born to a Tunisian father and a German mother, the 90-year-old Perez says he started photography between the ages of 11 and 12. By FETHI BELAID (AFP)

After 15 years of amateur photography alongside a teaching job, he was commissioned by a major Tunisian publisher to create a photo book of Sidi Bouzid, a poor but picturesque blue-and-white city, that launched his career.

In the exhibition, all his works are "inhabited" by people, Perez said. "People speak to me, their faces intrigue me, I would like to know what's behind them."

This idea is at the core of the work of Perez, a photographer of international repute, from the United States to France.

He "is a humanist photographer," like those who inspired him, including Robert Doisneau, Henri Cartier-Bresson and Elliot Erwitt, said exhibition curator Hamideddine Bouali.

Perez has only ever wanted to photograph his own country, in all its diversity.

"I feel concerned only by Tunisia," he said.

The 70 photos in the exhibition cover the breadth of his work: the sea and fishermen, the daily life of Tunisians, the old crafts. By FETHI BELAID (AFP)

The 70 photos in the exhibition cover the breadth of his work: the sea and fishermen, the daily life of Tunisians, the old arts and crafts.

Some of the most striking images are portraits of women, including "Lady of Chebika" and "Lady with a Lion".

Both were spontaneous portraits by Perez, who likes to interact with his subjects and has shunned "stolen" images or those shot from far away with telephoto lenses.

In the Lady of Chebika, wrinkled with age, "her face interested me but I did not know if I could approach her," Perez said. "I got closer, she did not react. I got closer again and she gave me a sign of assent. I took the picture."

"It's all intuitive," he said, stressing that "photographers have this ability to predict the next move".

For the exhibition being held close to where he was born, he chose "emblematic photos ... always framed, geometric and always inhabited" by people.. By FETHI BELAID (AFP)

He himself is surprised that he was able to capture the moment when a drop fell from the jar of a water carrier.

It's all about "patience", he said, knowing how to "wait for the right moment without provoking it".

But he remains humble, stating that "I do not take myself seriously. I am neither the father, nor the cousin, nor the grandfather of the Tunisian photo. I am just a photographer in Tunisia."