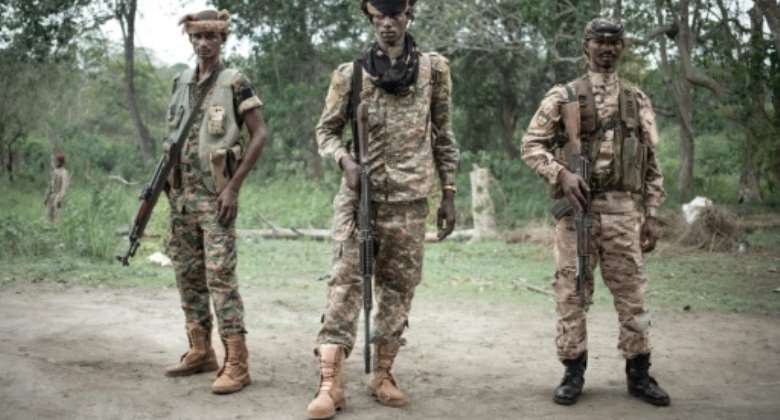 UPC militiamen, pictured near Bambari in 2019. By FLORENT VERGNES (AFP)

The attack occurred on Tuesday near Bambari, the CAR's fourth-biggest city, when three cars came under fire, leaving a "toll of 11 dead and six wounded," said Saturnin Nicaise Grepandet, the area's deputy prefect.

A provisional toll earlier listed seven dead, while aid workers, speaking on condition of anonymity, said at least 15 had died.

The CAR, a landlocked and poverty-stricken country in the heart of Africa, has been locked in a brutal conflict since 2013 when its then president, Francois Bozize, was overthrown by an armed group drawn mainly from the Muslim minority.

The coup triggered a bloodbath with the so-called "anti-Balaka," a force drawn mainly from the Christian and animist communities.

Bozize's elected successor, Faustin Archange Touadera, has struggled to exert control and swathes of the country remain in the hands of armed groups.

In Bambari, a city lying 380 kilometres (240 miles) east of the capital Bangui, rebels from the Union for Peace in Central Africa (UPC), one of the biggest armed groups in the region, recently killed two government troops.

The authorities on October 1 extended a curfew period in response to the worsening security.

A coalition of six rebel groups last December advanced on Bangui in the runup to presidential elections, but were thwarted after Russia and Rwanda rushed military support for Touadera.

A UN report in March said hundreds of violations and abuses of human rights had been documented over the previous year, leading to at least 1,221 deaths, including 144 civilians.

Some of the cases were attributable to the CAR armed forces and "private military personnel," it said, referring to the Russian paramilitaries.

The CAR government in a report last Friday acknowledged that some abuses had been committed by "Russian instructors," but contended that the rebels were to blame for most of the cases.