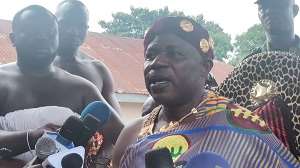 The Ejura Traditional Council has appealed to government to swiftly implement the recommendations of the Justice George Kingsley Koomson committee report.

The Chief of Ejura Barima Osei Hwedie II who made the call said implementation of the recommendations with not only bring development but will also foster eternal peace in the area.

Barima Osei Hwedie II said this on Friday, October 1, 2021, when the traditional council climaxed this year's Yam Festival at Ejura in the Ejura-Sekyeredumase District.

The Festival called ‘Sekyerene’ is celebrated annually by the chiefs and people to thank the ancestors of the land and the traditional stool for providing the people with a bumper harvest of fresh yams in the year just gone by.

Considering the disturbance in the Ejura in the past months, traditional authorities focused all attention in this year's event on strengthening the healing process and deepening ties among community members.

A grand durbar to commemorate the 2021 Yam Festival, was held on Friday, October 1 by the Ejura Traditional Council under the theme, “Peaceful Co-existence for Development.”

The Durbar was also used to raise funds towards developmental projects, especially a Police Divisional Headquarters at Ejura.

The Ejura chief, who is also a Senior Protocol Officer at the Office of the Vice President centered his address on peace and development.

He expressed regret about the unpalatable scenes and chaos that occurred in Ejura in the past few months.

He underscored the need for Ejura residents to welcome the commission's report and support government to immediately initiate processes to execute recommendations by the commission.

Barima Osei Hwedie II urged government, corporate organizations and all stakeholders to come to Ejura and help the traditional council in their efforts to construct an ultramodern Divisional Police Command as part of measures to maintain continuous peace and harmony in the community.

"Expanding the facility for police personnel and construction of recreational centers at Ejura were among the ten recommendations by the commission and I am urging all particularly the government to help Ejura relise this goal," he stated.