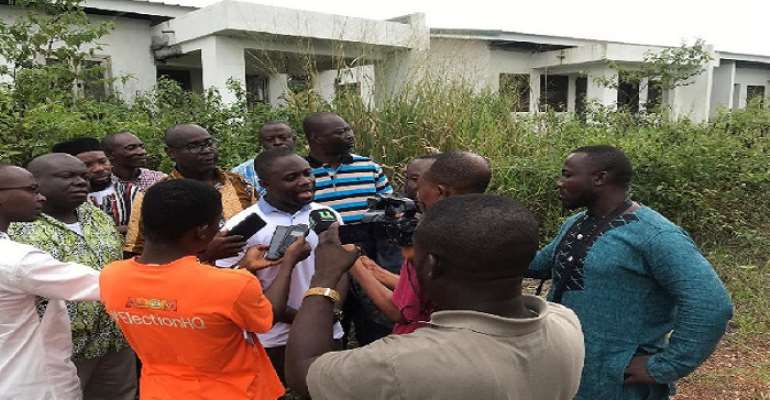 Members of the Minority Health Caucus in Parliament have expressed their disgust at what they describe as the worsening situation of the Kumawu Government Hospital.

After a tour of the facility on Monday, the caucus said they will continue to ask questions in Parliament over the 65% completed project which is being left to rot.

Ranking Member of the caucus, Kwabena Minta Akandoh who spoke on behalf of the group said government never thought the Caucus would visit the place again following claims that there is a contractor on site.

He said no reasonable government who thinks about the citizenry will prioritize new projects over abandoned ones.

“I’m very sad to see what we are all seeing at the moment because most of you were part of the team when we came more than two years ago, and, for me, absolutely nothing has changed.

“I was thinking that by the time we get here, there will be medical doctors and health professionals working here so that all of us will be smiling only to come back and meet a worsening situation. I believe that as a matter of urgency, again not until this project is completed and operationalised, we, especially on the minority side, will never relax, they never thought we could come back so they’ve been given sweet answers on the floor of the house, they say ‘contractors are on sight’ who is on sight? We’ve come to meet weeds,” he stated.

He pointed that the nation is paying huge sums of monies for the loan secured to construct it, asking "what benefit it has been to the nation for any interest to be paid."

“We are in 2021, when you talk, they will sit in Accra and try to defend. You’ve been in power for almost five good years and look at the state of the project.

“We will not allow this old man to misuse the resources of this country, It’s quite pathetic,” Hon Mintah Akandoh noted.

The 120-bed capacity Kumawu District Hospital in the Sekyere Afram Plains District of the Ashanti region was started in 2015 by the Former President John Mahama administration.

The project which was a turnkey arrangement with Messrs NMS Infrastructure and Barclays Bank Plc, London, at an estimated cost of $38.8 million was projected to be due for completion in 2017.

No machinations will break ordained Alan as NPP choice for 2...
46 minutes ago