“Being A Peacekeeper Is A Dream Come True”: Staff Sergeant Asare Charles
By UNMISS 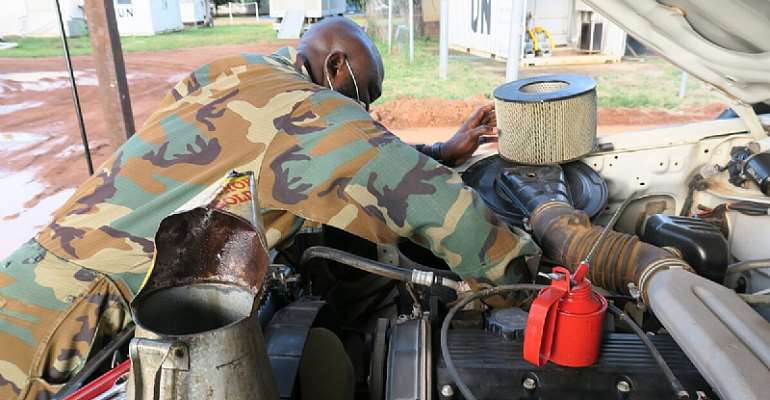 149 peacekeepers from Ghana serving with the United Nations Mission in South Sudan (UNMISS) in Aweil, Northern Bahr El Ghazal, recently received the prestigious UN medal for their contribution to the cause of durable peace in the world’s youngest nation.

39-year-old Staff Sergeant Asare Charles is one of them.

A mechanic serving with the Ghanaian contingent in Aweil, Asare’s passion for fixing things was nurtured by an incident that took place when he was just 10. He was en route to a religious service with his parents when their car broke down and his father didn’t know how to repair it. They were helped by a friendly taxi driver and right there young Asare made up his mind that he would become a mechanic when he grew up.

While acquiring his qualifications in auto mechanics, Asare discovered that he also had a strong urge to serve in his country’s army and, eventually, contribute to global peace and security.

Years later, this dedicated peacekeeper is living not one but two of his childhood dreams by serving with the UN Peacekeeping mission in South Sudan.

“I ensure that all armored vehicles and patrol vehicles are in ship-shape order enabling our Blue Helmets to go on patrol everyday to help local communities and prevent conflict,” he reveals. “I derive immense satisfaction from my work and receiving the UN Medal honouring my service is a matter of great pride for me.”

This dedicated peacekeeper has served for peace in five previous missions.

For her part, Asare’s colleague, Lieutenant Millicent Nma Aberese, another awardee grew up in a military family. When this dynamic 30-year-old peacekeeper was a young girl, she would iron her father’s uniform and always want to be a military officer herself. She is currently the public relations officer of the contingent in Northern Bahr-el-Ghazal and part of a dynamic Female Engagement Team that serves as role models for local women and girls.

“It feels wonderful to receive this prestigious medal,” says Millicent. “But what I’ve found most rewarding is the interactions I’ve had with women and girls across Northern Bahr El Ghazal. Women face very different and very complex challenges in a conflict situation, and I believe our engagements with them help build their confidence immensely.”

The UN medals were handed out in a vibrant ceremony which included traditional dances, a martial arts display and a friendly volleyball match with a local team.