The Historical Significance Of NPP's Return To Government 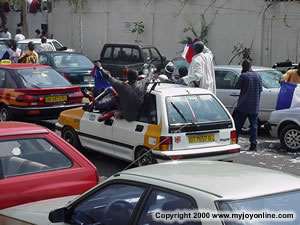 I have been combing my house in the last few days trying to locate a book I once used when I was a graduate student umpteen years ago! The book is called Prison Notebook. My all time favourite author called Antonio Gramsci wrote it.

Antonio Gramsci was an Italian marxist who wrote extensively on social classes in contemporary European societies. Unlike other marxists who championed the cause of working classes, Antonio Gramsci wrote in support of bourgeois classes. He thesis was simple: that in every society there was a need for a dominant social force or class to impose its vision on the rest of the population. He argued that it is only when there is a distinct class that succeeds in subordinating the rest of society to its rule that the society can progress. Of course this is an oversimplification, and it may sound rather outrageous or too elitist to some.

His thesis makes much sense when viewed in contemporary market based democracies. In these societies, the elites, who may be considered as enlightened, have for centuries, succeeded in imposing their tastes, culture and even worldview on the rest of their citizens. In return, they have managed to guarantee them the most basic necessities of life such as health, education and shelter. If you are in doubt, just make an effort to study a few Western European societies and Canada. In these countries, the majority of the people enjoy a relatively decent standard of living. The social safety net developed in these countries has been so successful that only a small fraction of the population falls through the crack or is unable to meet their most basic needs. This explains in part why the much-trumpeted working class revolution never really materialised. And with the collapse of the former Soviet bloc countries, there are only very few die hard marxists who still clinch to the idea that there will ever be a working class revolution.

Now some of you may be wondering what has Antonio Gramsci’s thesis got to do with NPP win in December 2000? A great deal I may add. You see in Ghana since independence, what I may consider the real bourgeoisie, represented by the Busia-Dankwa tradition was frozen out of power for many years. And thus they never succeeded in imposing their vision or worldview on the rest of the Ghanaian society. Those of you who know the political history of Ghana will remember how the Great Dr. Kwame Nkrumah out smarted them to wrestle control of the emerging Ghanaian state. Since the overthrow of Nkrumah’s CPP on 24 th February 1966, Ghana has been ruled by a rag tag of leaders whose motive and collective vision for the country have been less than coherent. The last ruler, Flt Lieutenant J.J. Rawlings, foisted himself on the rest of society for many years until he sought the mandate of the people in 1996. He floundered. His moral crusade, which was based on an incoherent concept of probity and accountability, flopped. The majority of his people were opportunists who could not resist the temptation of power. In the end, a good number of them exhibited crass materialism, which was worse than what they purportedly came to power to correct.

The last time the Busia-Dankwa faction ruled Ghana was between 1969 and1971-a relatively short period and, therefore, they could not fully implement their programmes. Now after 30 years in the political wilderness, they are back in power peddling once again their vision of society based on human rights, the rule of law and free enterprise. They have a historic opportunity to prove to the rest of the Ghanaian society and the world that, under their rule, the most basic needs of the ordinary Ghanaian would be met. This is a noble cause and they better deliver or else, the rest of the population will lose faith in the ideals embodied in the Busia-Dankwa tradition. This author truly hopes that the NPP understands the historical significance of their coming to power for the second time.

BONABOTO Chiefs Run To Akufo-Addo To Probe Why Airport Proje...
25 minutes ago