Soweto, the President and the ANC's 'empty promises' 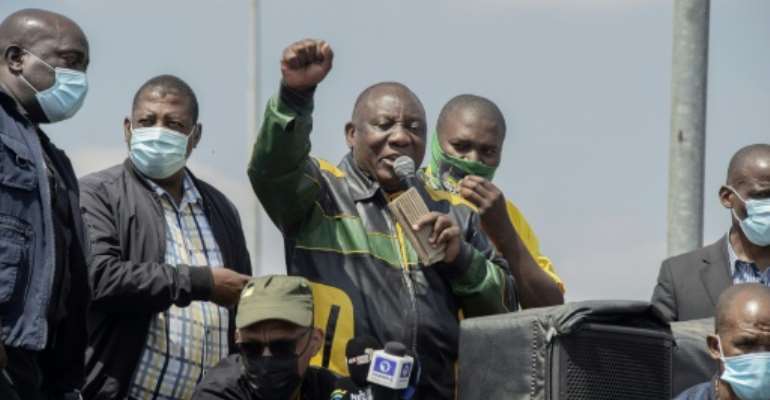 Sbusiso Mbele, just 14, runs joyfully after the presidential convoy shouting: "I wanna see Ramaphosa, he's going to give us electricity."

President Cyril Ramaphosa is out campaigning on Saturday in the Soweto townships for the ruling African National Congress ahead of local elections.

Nomzamo Park has not had electricity for nearly three years, since copper cables were stolen and fire broke out at facilities run by state-owned energy company Eskom.

Ramaphosa promises to improve conditions in the tough neighbourhood on the edge of Johannesburg.

The ANC leader sports a leather jacket in the party's yellow and green colours as he alights from a luxury sedan, surrounded by his travelling entourage.

Nearby, a ragtag group of children are chanting "Ramaphosa! ANC!", just as an ANC official taught them before the motorcade pulled up.

South Africans will vote for councillors in more than 250 municipalities on November 1.

The ANC has been in power for 27 years but declining popularity has marked out these elections as a real test for the party of the late leader and liberation icon Nelson Mandela.

Outside her tin-roofed home Fezile Mnqokoyi, 27, waits for the head of state.

She wants to show him the infections on her two-year-old son Enzo's legs, caused by filthy water.

And to remind him of the party's promises to find work for youngsters.

The smell of paraffin wax pervades her home, as it does almost all the houses where it serves for cooking and to heat water, in the absence of electricity.

The mother knows the paraffin is behind her toddler's coughing fits but says she cannot manage without it.

Medicine to treat the problem is too expensive.

Fezile Mnqokoyi picks her moment to launch into her complaint out loud: "We want electricity, and jobs.

"We are suffering right now, sometimes we don't even have the money for paraffin."

The president agrees and pledges to sort everything out, claiming to have asked financially-strapped Eskom to ensure the power supply to Soweto.

And then he sets off to the next home, trailed by security men and journalists.

"The ANC always gives promises, empty promises," says Fezile Mnqokoyi, who carries her son on his back.

The rest of the visit is well-planned. Each house has been pre-selected.

"Register, register" Ramaphosa tells the families, urging them to sign up to vote ANC on the electoral lists.

For 31-year-old Siphosethu Sisilana, who also lives in the township, it is no longer enough.

"For the past year I've been not voting, but I realised that if I don't vote ... that means I am okay with ANC rule."

So he went to register.

"I'd rather go give my vote to another party than ANC," he says.

After several hours of going door-to-door, Ramaphosa climbs atop a party truck parked on wasteland strewn with rubbish.

"Amandla!" (Power), he yells, a slogan of the former struggle against apartheid.

And despite the recriminations, power outages, unemployment and empty fridges, fists pump among the crowd and the shout goes up "Viva ANC, viva".