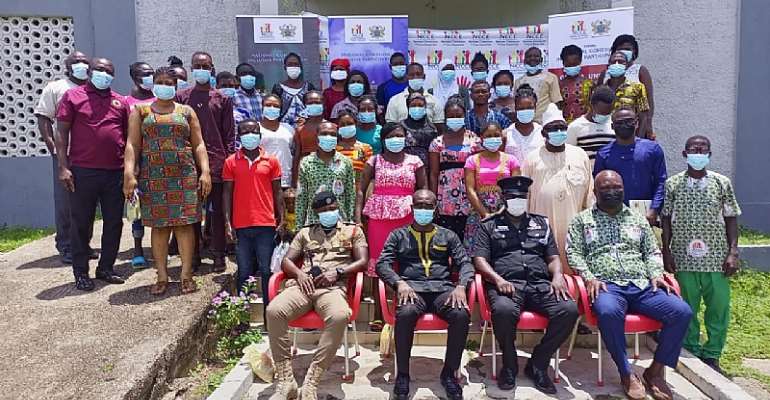 The National Commission for Civic Education (NCCE) in the Krachi West Municipality in collaboration with the National Security, held a Town Hall Meeting on Friday, September 17, 2021.

This meeting with sponsorship from the Ministry of National Security was aimed at fostering Cohesion and Inclusive Participation in Governance in the Oti Region.

The Krachi West NCCE Director, Mr Kenneth Karikari who spoke on behalf of the Oti Regional NCCE Director said, the activities of the Secessionists Movements and Vigilante Groups in Ghana and other countries such as Nigeria and Cameroon could plunge the West African sub-region into chaotic conflict if not handled cautiously.

He further noted that the issuance of domestic threats to the Security and National cohesion has been informed by local socio-economic and cultural grievances aggravated by local radicalization as in the case of the Western Togoland Secessionist movement, political point scoring and reciprocal attacks as manifest in the political parties, vigilante groups, religious tensions, inquality and marginalization.

These violent acts he said, have negative consequences on the image of the country among the business community and affect International confidence on Ghana as a safe destination for investment.

The BNI director for Krachi West also made it clear that the issue of security is not for only the security services, but rather a national concern, and for that matter individuals must always be security conscious. He encouraged Christians and Muslims to fix security cameras at their places of worship if possible to help curb this menace. He further noted that people should be vigilant within their communities and be each other's keepers so that any suspect of threat on the security can be relayed to the security personnel for investigation.

Some participants took to the floor during the open forum section to express worries about possible future land litigations and the proliferation of spiritualist on the screens of some Tv stations which has recent days made people to be killing others for money rituals.

Responding to some of the concerns raised by these participants, the Krachi West Police Commander DSP Samuel Nkrumah, made it clear that, very soon the Regional Lands Commission office will be operationalized soon so that in the future it might not bring about land guards and land litigation.

He again noted that, the Land act will soon be in full force to help such situations. On the issue of spiritualist, he said, “we are doing our best to bring perpetrators to book in terms of any murder issue". My only worry is that we don’t have any law to deal with those spiritualist seen on Television and I therefore urge CHRAJ Director that they should look into the human rights laws again so that it can help our work”.