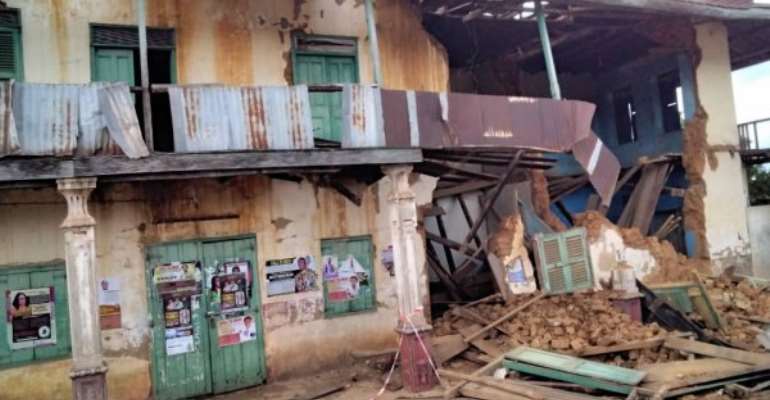 Another fire incident at Akim Oda has consumed the Chief's palace, less than 72 hours after a similar inferno gutted a substantial portion of the town's main market.

At about 1430 hours on September 16, 2021, residents of Ahenbrono, Akim Oda-Old Town, were astonished to see the old chief palace building razed down by fire, the cause of which could not immediately be determined.

But, sources close to the palace told the Ghana News Agency that the building had been a threat to nearby residents and were grateful nobody was killed during the incident.

Looking at the residual edifice, some residents called on the Birim Central Municipal Assembly to pull down the remaining structure to prevent further disaster.

Officials of the National Disaster Management Organisation (NADMO), Birim Central Municipality, said they were still counting the cost in last Tuesday's fire disaster and meeting victims who had stalls and stores at the market for their details.

Mr Alexander Akwasi Acquah, Member of Parliament (MP) for Akim Oda Constituency, has visited the fire scene and called on the traders to provide factual and accurate information to help the assembly solicit support.

On September 13, 2021, at about 2050 hours, a devastating fire outbreak at the Akim Oda main market resulted in several losses of property. There was no casualty.

Officials say investigations were still ongoing to unravel the cause of the fire outbreaks.

No machinations will break ordained Alan as NPP choice for 2...
50 minutes ago