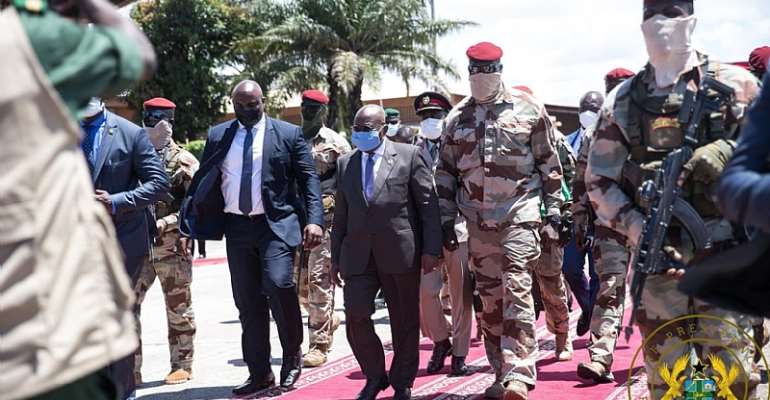 The Chairperson of the Economic Community of West Africa (ECOWAS), H.E Nana Addo Dankwa Akufo-Addo has safely arrived in Conakry, Guinea, where he is set to hold talks with the leadership of the military.

The Special Forces of the Military in Guinea on September 4, 2021, successfully took over government and dissolved the country’s constitution after arresting President Alpha Conde.

While talks are ongoing for the country to be restored to democratic rule, Ghana President Nana Akufo-Addo who is chair for ECOWAS has traveled to Guinea.

He is accompanied by the President of the Republic of Côte d'Ivoire, H.E Alassane Ouattara and will hold talks with the military leadership in Guinea.

Already, H.E Nana Akufo-Addo and his entourage have been met by the leader of the Special Forces who led the coup, Colonel Mamadi Doumbouya.

The early talks will center largely on the fate of President Alpha Condé, amongst others.

Already, ECOWAS has given the military six months to return the country to constitutional order.

Check out pictures of H.E Akufo-Addo’s arrival in Guinea and early engagements with the military led by Colonel Mamadi Doumbouya below: