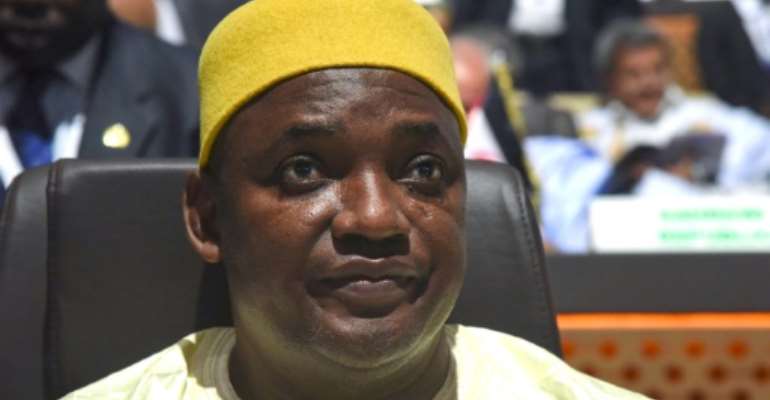 Gambian President Adama Barrow has stirred anger and confusion ahead of a December 4 presidential poll, after forming an electoral alliance with ex-dictator Yahya Jammeh's political party.

The pact has proved deeply controversial: Barrow himself ended Jammeh's brutal rule in a 2016 election, sparking hopes of a new democratic era in the tiny West African state.

There are also fears it will undermine findings from a truth commission on Jammeh-era abuses that are expected to be published this month.

Details of the agreement between Barrow's and Jammeh's parties have not been disclosed.

However, the former autocrat's Alliance for Patriotic Reorientation and Construction (APRC) party announced its existence on September 4 and said that it would back Barrow in the polls.

"The victims (of the former regime) find it quite disheartening and treacherous," the group said in a statement.

Jammeh seized power in The Gambia in 1994 as part of a bloodless military coup. He was then repeatedly re-elected in disputed circumstances until he was defeated in December 2016 by Barrow, then a relative unknown.

Human-rights activists have accused him of committing a litany of crimes during his 22-year rule: from using death squads, to raping a beauty queen and sponsoring witch hunts, among others.

It is not clear whether Jammeh's return is a condition of the agreement between the APRC and Barrow's National People's Party (NPP).

But the prospect remains dear to those faithful to the former dictator.

Ansumana Gibba, an APRC supporter, told AFP that he approved of his party's decision.

"This will pave the way for the return of our supreme leader," he said.

For its part, the NPP has stressed that the alliance is designed to strengthen national security and stabilise the polarised country.

"The alliance is between two legally registered political parties and not individuals," it explained in a statement.

Barrow's latest move follows years of apparent manoeuvring to secure his political future in The Gambia -- the smallest country on mainland Africa.

He secured victory in 2016 after a coalition of parties backed him, on condition that he quit his United Democratic Party (UDP) to stand as an independent, and that he step down after three years.

But the president reneged on the promise -- serving the full five-year term allowed under the constitution instead -- triggering sometimes violent protests.

Barrow also formally registered the NPP in December 2019, with himself as leader, in a move seen as a way for him to contest future elections unhindered.

The NPP-APRC alliance has come as blow to many in the nation of about 2 million people who are hoping to see Jammeh put on trial.

After Barrow took office, The Gambia set up a Truth, Reconciliation and Reparations Commission (TRRC) to investigate alleged abuses under Jammeh.

The truth panel heard several hundred witnesses between 2019 and May, who offered harrowing testimony on murder, torture and rape committed on the former leader's orders.

The TRRC is due to publish its findings, with recommendations, in late September. The report is highly anticipated by rights groups to see whether it will recommend pursuing criminal charges against Jammeh.

The UDP said that Barrow "lacks empathy for the many victims of Yahya Jammeh".

'This alliance demonstrates that President Barrow has no moral qualms,' it said in a statement.