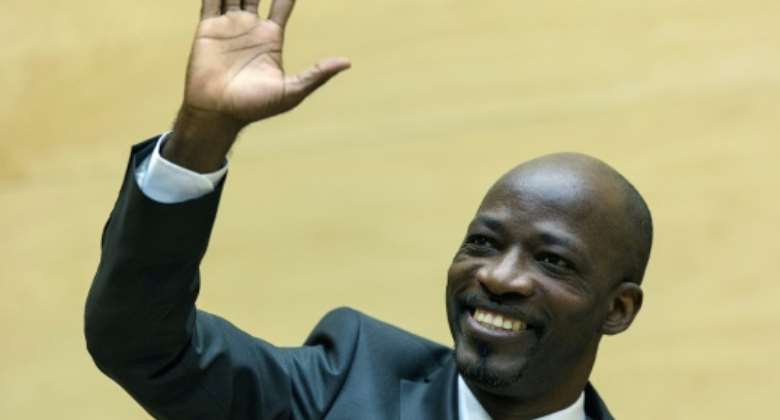 Charles Ble Goude was acquitted by the ICC -- his lawyers are now demanding compensation. By MICHAEL KOOREN (POOL/AFP)

Charles Ble Goude, a former right-hand man to Ivory Coast's ex- president Laurent Gbagbo, is demanding compensation from the International Criminal Court (ICC) after being charged and acquitted of crimes against humanity, his lawyers said on Friday.

Ble Goude and Gbagbo were acquitted by the court in March over charges arising from post-election violence in Ivory Coast in 2011.

"Where the Court finds that a grave and manifest miscarriage of justice has occurred, the judges may, at their discretion, award compensation to an acquitted person after his detention," lawyers Geert-Jan Alexander Knoops and Claver Nery Kouadiom said in a statement.

Goude's legal team also spoke of "numerous failures of the Office of the Prosecutor that have violated (Ble Goude's) fundamental rights."

Ble Goude, a former youth militia leader, "hopes that his case can serve as an example to call the Office of the Prosecutor of the ICC" not to pursue "pre-constructed cases, which are unconvincing, and not based on evidence," the lawyers' statement continued.

Part of any compensation from the court in The Hague will go towards helping "the victims of the post-electoral crisis in his country," they added.

The West African nation was plunged into deadly violence after Gbagbo refused to accept defeat in the 2010 presidential elections.

The ensuing conflict claimed more than 3,000 lives and more than 200,000 people fled the country.

After he was ousted, Gbagbo was flown to The Hague to face charges of crimes against humanity, of which he was eventually acquitted.

Ble Goude, now 49, was also prosecuted and acquitted on the same charges.

Gbagbo has since returned home from Europe and met with his erstwhile rival, President Alassane Ouattara.

But Ble Goude is currently without a passport.

In July he was invited into the Ivorian embassy in The Hague to start the procedure to apply for one.

"To this day, he continues to suffer the consequences of the violation of his human rights since, despite his acquittal, Mr. Charles Ble Goude is forced to live outside his country as a stateless person," his lawyers argued.

Ble Goude was among the most controversial members of Gbagbo's circle, nicknamed the "General of the Streets" for his ability to whip up support for the ex-president.

Critics and international aid groups had considered him to be among those who had contributed most to the post-election bloodshed.

He was arrested in 2013 in Ghana and transferred the following year to The Hague to be tried alongside Gbagbo.

Despite their ICC acquittals, both men were convicted in absentia in Ivory Coast and sentenced to 20 years for "looting" the local branch of the Central Bank of the West African States at the time of the unrest.

While the government has now made it clear that the sentence against Mr Gbagbo will be dropped, it has said nothing about the sentence for Ble Goude.