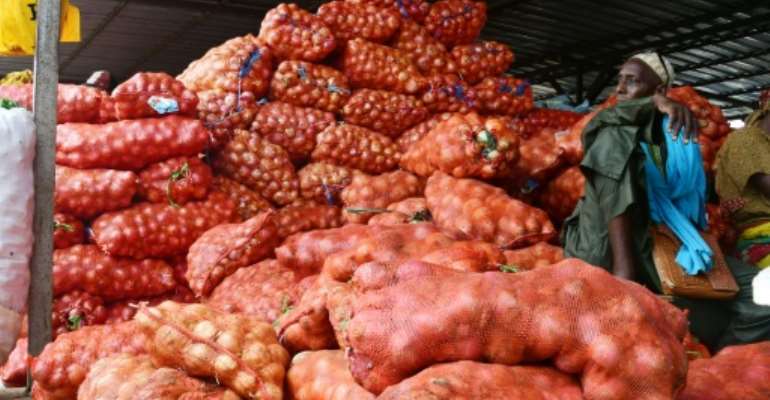 Onions are a lifeline to many in Senegal, where it is a key ingredient in the national fish and rice dish, Thieboudienne, as well as Yassa chicken. By SEYLLOU (AFP)

In a satellite town of Senegal's capital Dakar, 25-kilo sacks of onions are piled up on pavements, ignored by passers-by.

The West African country is in middle of a supply glut, with prices plummeting and heaps of the pungent vegetables left to rot by the roadside. Farmers are in despair.

"I'm going to give some to the local women," says farmer Diongue Masseye, 71, gazing despondently at his onions.

He is standing inside a 450 square metre (5,000 square foot) warehouse in Bambilor, an onion-producing town about 30 kilometres (20 miles) northeast of the capital Dakar, where his unsold produce has started to sprout.

Gloomy farmers -- who produce about 450,000 tonnes of onions a year -- blame the problem on increased foreign competition and a lack of storage capacity.

But the government also argues that farmers have overproduced this year, flooding the market with onions and depressing prices.

Masseye said prices had nearly halved. A 25-kilo sack of onions fetched the equivalent of about 13 euros ($15) a few months ago, he said, but are now worth about seven euros ($8).

The bulbous vegetable is a lifeline to many in the nation of 16 million people, where it is a key ingredient in the national fish-and-rice dish, Thieboudienne, as well as Yassa chicken.

Amadou Abdoul Sy, the director of Senegal's market regulation agency, said some 200,000 farmers are employed in the onion sector.

"Everyone is producing at the same time," he told AFP, explaining the glut.

Senegal's onion sector has long been plagued by problems. Almost a third of the crop is lost every year, Sy said.

The UN's Food and Agriculture Organisation noted in a 2018 report that the use of low-quality seeds by Senegalese farmers contributes to the problem.

Often, producers also harvest their onions too early to try to get ahead of the competition, leaving the vegetables wet. This leads to significant losses and makes onions difficult to store, the FAO said.

Consumers are shying away from the damaged goods.

Trader Daouda Mbaye, in a market in village in western Senegal, demonstrated sacks of poor-quality onions and said buyers were more interested in other vegetables.

But to the dismay of local farmers, many people will buy imported onions.

But foreign-owned farms in Senegal are still producing onions, he explained. They are often larger than Senegalese farms and have better storage facilities.

The head of Senegal's onion producers association said the government suspended onion imports in January in a bid to help struggling locals . By SEYLLOU (AFP)

The onion farmer is calling for legislation that will protect small producers who fall "prey to unfair competition" from larger ones.

Lack of storage facilities are a chronic problem in Senegal, according to farmers, where a warm climate means vegetables quickly go bad.

For Masseye, the 71-year-old farmer, the government should have provided refrigerated store rooms to ease pressure on producers.

But Amadou Abdoul Sy, the director of the market regulation agency, said that producers themselves are partly to blame.

He said government authorities had asked farmers to sell their goods at different times in order to stop a supply glut.

"They were not listened to," Sy said.

While farmers are unhappy, some consumers are pleased.

Astou Ndiagne, a housewife in Bambilor, flashed a mischievous smile when asked about the lower prices. "This is allowing us to save money," she said.