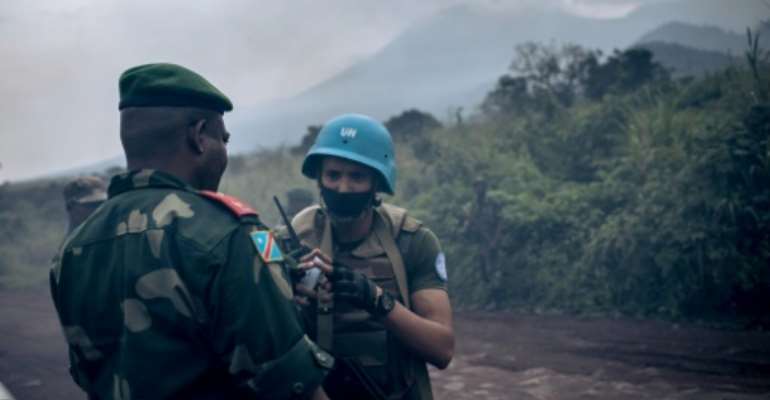 The convoy was under escort by UN peacekeepers in the MONUSCO force and the Congolese army. By ALEXIS HUGUET (AFP)

Suspected jihadists killed four people and burnt up to 14 vehicles of a convoy under military escort on Wednesday in Democratic Republic of Congo's northeastern Ituri province, a Western monitoring group and local sources said.

The attack occurred near the town of Ofai, the US-based Kivu Security Tracker (KST) said on Twitter, adding that the Allied Democratic Forces (ADF) were suspected to have carried it out.

Map of the Democratic Republic of Congo locating the provinces of Ituri, North Kivu and South Kivu. By Sophie RAMIS (AFP/File)

It said the toll of three dead was still provisional.

The ADF, which the United States has deemed a terrorist group, is considered the deadliest of scores of armed militias that roam the mineral-rich eastern DR Congo.

The convoy was under escort by UN peacekeepers in the MONUSCO force and the Congolese army, according to a local civil society official, Dieudonne Malangayi.

Lieutenant Jules Ngongo, spokesman of military operations in Ituri, said the rebels killed four people including one whose charred body was found in one of the vehicles that were set ablaze.

"We have managed to find more than 60 people who fled (the attack) into the bush," he added.

"The ADF rebels cut the convoy in half," Malangayi told AFP, adding that the attack left three dead while 13 vehicles were torched.

A military official in the region who requested anonymity said ADF rebels set fire to 14 vehicles.

AFP viewed a video showing several vehicles burning on the road, with dwellings nearby, as armed peacekeepers patrolled all around the site of the attack.

The ADF, historically a Ugandan Islamist group, have been accused of killing thousands of civilians in both Ituri and North Kivu.

Since April 2019, the Islamic State group (IS) has claimed responsibility for some of their attacks.

Since May, the provinces of North Kivu and Ituri have been under a state of siege with army and police forces replacing civilian authorities.