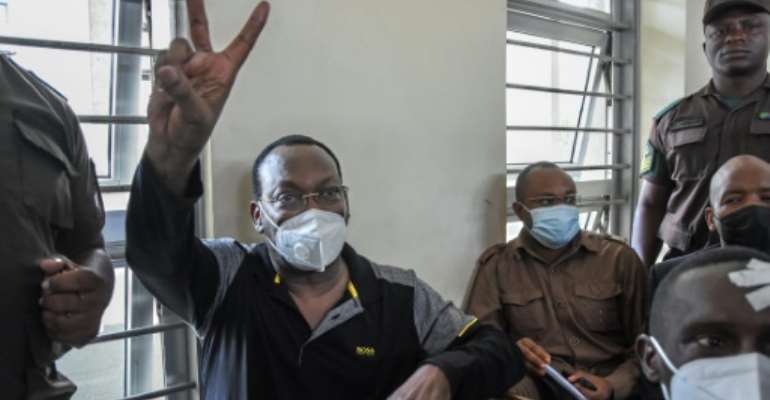 Tanzania Chadema party chairman Freeman Mbowe has been in custody since July 21. By STRINGER (AFP/File)

The leader of Tanzania's main opposition party appeared in the country's high court on Tuesday to face terrorism charges in a case described by his party as a politically-motivated move to crush dissent.

Chadema party chairman Freeman Mbowe and his supporters accuse police of torturing him in custody to force him to make a statement in the trial which opened under tight security, with most journalists banned from the courtroom by police.

Mbowe has been behind bars since July 21 when he was arrested along with other senior Chadema officials in a night-time police raid just hours before they were to hold a public forum to demand constitutional reforms.

The 59-year-old has been charged with terrorism financing and conspiracy in a case that has sparked concerns about the state of democracy and the rule of law under President Samia Suluhu Hassan.

On Monday, Mbowe had appeared in court to pursue a case against top legal officials, claiming his constitutional rights had been violated during his arrest and when he was charged.

Hassan's government, citing Covid-19 regulations and security, had warned foreign diplomats against turning up to court to follow the case without notifying the foreign ministry.

Representatives from the British and US embassies were present at Tuesday's hearing in the Dar es Salaam court, which was also attended by Chadema's senior leaders.

The opposition has denounced the arrests as a throwback to the oppressive rule of Tanzania's late leader John Magufuli who died suddenly in March.

There had been hope Hassan would bring about a new era of democracy after the increasingly autocratic rule of Magufuli, nicknamed the "Bulldozer" for his uncompromising style.

But Chadema leaders say the arrests of Mbowe and his colleagues reflect a deepening slide into "dictatorship".

They have accused the government of meddling in the case and want the court to dismiss the charges.

Prosecutors say the allegations against Mbowe do not relate to the constitutional reform conference Chadema had planned to hold in the port city of Mwanza in July, but to alleged offences last year in another part of Tanzania.

Chadema has said prosecutors accuse Mbowe of conspiring to attack a public official, and giving 600,000 Tanzanian shillings ($260/220 euros) towards blowing up petrol stations and public gatherings and cutting down trees to block roads.