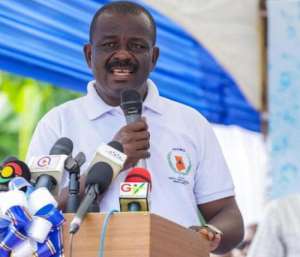 People could be underrated for varied reasons but in the case of Hon. Stephen Kwame Quaye, it is his humility and matured way of handling things that has caused people to underrate him. Whatever the case may be, when the wrong person is underrated, things go wrong.

As captured in my earlier article, Hon. Stephen Kwame Quaye has served his party, the New Patriotic Party (NPP), as Constituency Chairman for two consecutive times. Under his chairmanship in 2012, he led Hon. Hawa Koomson to victory and in 2016, he led both President Nana Addo and Hon. Nenyi George Andah to victory as President and MP respectively.

Apart from the projects Hon. Stephen Kwame Quaye and the immediate past Member of Parliament, Hon. Nenyi George Andah, introduced, the Awutu Senya West DCE has introduced a few other projects after the 2020 general elections. Some of these projects have been completed this year. A typical example of such project is the dredging of the Pompom River to prevent flooding that has been plaguing the lives of over Two Thousand people for several years. Foot bridges have also been constructed over this river to enable the people in this catchment area to access other communities they routinely engage for their economic and social activities.

Among other projects, the DCE has also completed and handed over an office building to the National Health Insurance Scheme (NHIS) of the district. To prevent the situation of spending rent allowances on DCEs in the future, Hon. Stephen Kwame Quaye has started the construction of a DCE bungalow and staff quarters for the Awutu Senya West District Assembly.

Per the axiomatic facts surrounding Hon. Stephen Kwame Quaye, there is no doubt that he has endeared himself to the majority of the NPP footsoldiers. There is therefore, no doubt that majority of the NPP footsoldiers look up to him for vision and direction. Such a person deserves to be treated with honour and reverence because he has a lot to offer his party and the Awutu Senya West District or Constituency as a whole.