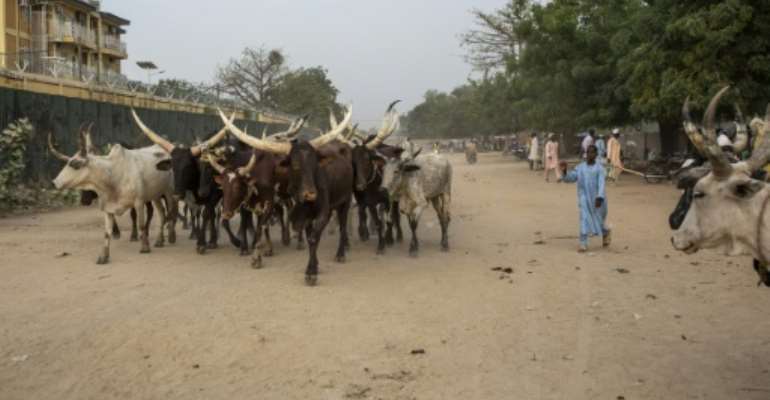 Most of Cameroon's cattle is raised in the heavily populated Far North region. By patrick meinhardt (AFP/File)

Twelve people have been killed and 48 wounded in clashes between fishermen and herders in northern Cameroon, the region's governor said on Thursday.

The violence, which is rare between the two communities, erupted on Tuesday in Logone-Birni in the Far North region, a tongue of land wedged between Nigeria to the west and Chad to the east.

"Everything started from a banal incident," the governor, Midjiyawa Bakari, said on the state radio channel CTRV.

It began when members of the Musgum community erected dams to divert water to help them catch fish, in a location where ethnic Arab Choa herders also take their cattle for watering, he said.

"A row broke out between two individuals" which degenerated into full-fledged violence, he said.

"We have provisionally recorded 12 dead and 48 wounded, who have been hospitalised in Kousseri... and N'Djamena," the capital of Chad, he said.

A local official told AFP that the belligerents used machetes, knives and bows and arrows.

"The tension hasn't fully subsided. Several houses have been burned down," the source said, asking not to be identified.

The two communities had asked the authorities to intervene to define areas that they can each use without harming the other, he said.

Clashes between ethnic groups are rare in Cameroon but are frequent in Chad and Nigeria, particularly between sedentary farmers and semi-nomadic herders.

Twenty-two people were killed and 18 were wounded on Saturday in Hadjer-Lamis province in central Chad.

Akufo-Addo government most lawless Ghana has ever had – Nyah...
37 minutes ago

A/R: We don't want a Chairman who display gold on TV but neg...
59 minutes ago