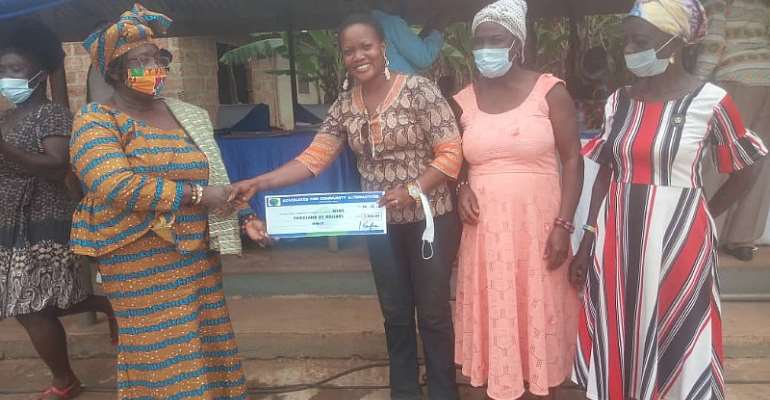 The chiefs and people of Juaso, Segyemase and Nsuapemso in the Fanteakwa South District of the Eastern Region could not hide their joy when each of the three communities received $9,000 (Ghc 54,000.00) from Advocates for Community Alternatives (ACA), an NGO, to undertake livelihood enhancement projects.

There were spontaneous jubilations at the main durbar grounds at Juaso near Osino where each of the communities entered into an agreement with ACA to judiciously apply the grant solely for the purpose to which they have been given.

The grant, totaling $ 27,000.00 or Gh.c 162,000.00, is to support the communities to undertake development projects of their choice, which would improve their livelihoods and health.

The people of Juaso, for instance, are unanimous that they would invest their grant in soap-making to create jobs for residents of the area, especially the youth, so as to create sustainable jobs and improve on their income levels.

Residents of Segyemase and Nsuapemso on the other hand are applying their grants in the construction of Community-Based Health Planning and Services (CHPS) compounds to address their primary health needs.

Speaking at the Grant Agreement ceremony at Juaso, the Community Development Director of ACA, Nana Ama Nketia-Quaidoo, said the three beneficiary communities were selected from other mining communities partly as a result of their receptive nature and their level of seriousness about the application of the grant.

She said each of the three beneficiary communities has been assisted to open a bank account in which their money would be lodged and called on the communities to sustain their level of seriousness to ensure that the projects are successfully implemented within schedule.

She emphasised that the money was not meant to be shared among community members but to undertake the agreed projects which would in the long-term inure to the benefit of the entire community.

Explaining the Agreement to the people prior to its signing, an official of ACA, Osei Nimako, said each community was expected to submit periodic progress reports on “a description of what work has been completed on the project and what work remains to be done” as well as “originals of receipt documenting the proper expenditure of all funds previously provided by ACA to Community.”

“ACA and Community contemplate that, during the implementation of the Project, there will be approximately eight or ten Progress Reports, followed by provision of materials and/or funds for the next phase of the Project”, he further stated.

Theophilus Boakye-Bediako, Assistant Planning Officer of the Fanteakwa South District Assembly, commended ACA for coming to the aid of the three communities and pledged the Assembly’s support toward the successful implementation of the various projects.