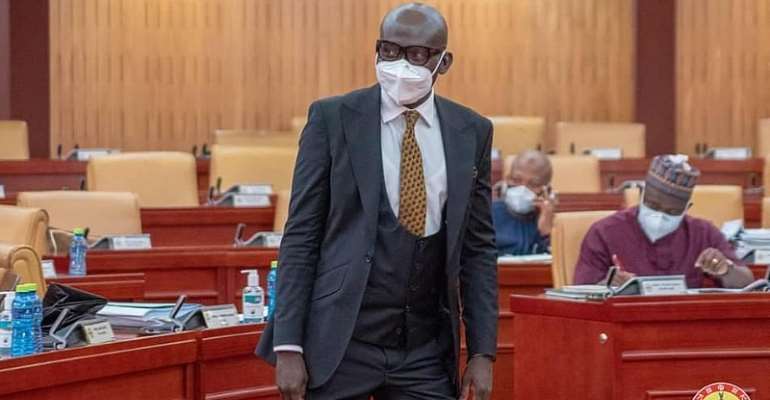 The Attorney General and Minister of Justice, Godfred Dame, has briefed Parliament on the status of investigations into some high profile murder cases in Ghana.

Mr. Dame gave the update to the legislative house on Wednesday following a question filed by the Member of Parliament for North Tongu, Samuel Okudzeto Ablakwa.

Some of the cases he updated the MPs on included the killing of investigator with Tigereye PI, Divela Hussein Ahmed Suale, former MP for Abuakwa North, J.B. Danquah Adu; former MP for Mfantseman, Ekow Kwansah Hayford and a professor at the University of Ghana, Prof. Emmanuel Benneh.

With regard to Amhed Suale's case, Mr. Dame said two mobile phones- iPhone 7 plus and Huawei smart phone- had been sent to the United States of America for unlocking and extraction of information by Information Technology experts there.

“The mobile phones of the deceased were sent to the United States of America for unlocking and extracting of information by Information Technology experts over there. On 17th July 2020, a request letter to that effect was sent to the US Embassy. On 11th August 2020, the phones were sent to the US through their American Embassy in Accra,” Mr. Dame stated.

The Attorney General continued that “In February 2021, the American Regional Security Officer, Bill Peiler, successfully handed over the two iPhone 7 plus Huawei smartphone belonging to the murdered investigative journalist, Ahmed Suale together with an external drive containing the data extracted from the phones to the investigator”.

Currently, according to the Minister of Justice, “The huge volumes of data comprising millions of documents, videos, audios, text and Whatsapp messages are being analysed by a team from the Homicide and Cybercrime Units [of the Ghana Police Service]. Investigations on other aspects of the matter also continue.”

Investigations into the murder of the late Ahmed Suale, the Minister disclosed, commenced immediately after his death on 6th January 2019.

“Two empty shells of 9 x 199mm were found on the ground while three other empty shells and three spent pellets of 9 x 19mm ammunition were also found in the car. An iPhone 7 plus mobile phone and Huawei smart phone belonging to the deceased were also found and retrieved,” the Attorney General indicated in the response.

He added that on 17th January, 2019, an autopsy was performed on the body of the deceased by Dr. Osei Owusu-Afriyie, a pathologist at the Police Hospital after it was identified by a paternal uncle of the deceased, Ex-WO1 Alhaji Mahama in the presence of the police.

The pathologist gave an interim cause of death as (a) hemorrhagic shock (b) severe chest injury and (c) gun shot at close range (un-natural), before the body was subsequently released to the bereaved family for interment. J.B Danquah

The AG said the trial of the accused persons in the murder of the MP was a case before the High Court (Criminal Court 5) presided over by Her Ladyship Lydia Osei Marfo.

The AG said unfortunately, the former presiding judge was transferred to Ho, and a new judge was appointed to the Criminal Court 5, pointing out that “not long afterwards, the nation was hit with the Covid-19 pandemic, so trials of criminal cases were put on hold. On 9th February 2021, the trial resumed before the new judge, Justice Lydia Marfo.” Ekow Hayford

On the former Mfantseman MP, the Minister said, Mr. Ekow Hayford, on October 9, 2020, at about 1am between Abeadze Dominase and Duadze on the Mankessim-Assin Fosu highway in the Central region, was ambushed and killed.

He disclosed that investigations led to the police tracing the MP's Samsung A50 mobile phone to Aboabo No. 2 in Kumasi, and added that they found the phone with one Nazairu Fudailu Nash alias SP, who stated that he bought the phone from Alhassan Abubakar aka Abu Fulani, who is a mobile phone repairer for GH¢780.00.

“When Alhassan was arrested, he informed the police that he also bought the phone from one Mohammed for GH¢650.00. The police could, however, not trace the said Mohammed even though they obtained detailed information about him.”

On 10th May 2021, a robbery attack similar to the one that claimed the MP's life took place at Heman-Akokoaso on the Obuasi-Kumasi road in the Ashanti Region, but the police were able to foil the robbery leading to the arrest of the robbers including a certain Jibor Ali.

“In the course of interrogation, Jibor Ali informed the police that the three of them, together with the deceased Mohammed, were involved in the robbery that led to the murder of the MP at Abeadze Dominase on the Mankessim-Assin Fosu Highway on the 9th October 2020.” Prof Benneh

Regarding Prof Benneh, the Minister said the body of the lecturer was found on September 12, 2020, by his sister, Ambassador Elizabeth Afia Benneh and others after they broke the lock into his residence. They had not heard from him since the night of 10th September 2020.

“In the course of investigations, three suspects were arrested. The first suspect, James Nana Womba, who is believed to have strangled the deceased to death, also died in custody on 17th October 2020,” he asserted.

“After investigations were concluded, the docket was forwarded to the Office of the Attorney-General on 3rd February 2021. The advice was dispatched on 17th February 2021 recommending the prosecution of the suspects.”

On 21st May 2021, a Bill of Indictment was filed to commence the prosecution of the second suspect, Ebenezer Kwayisi, Mr. Dame told the House.