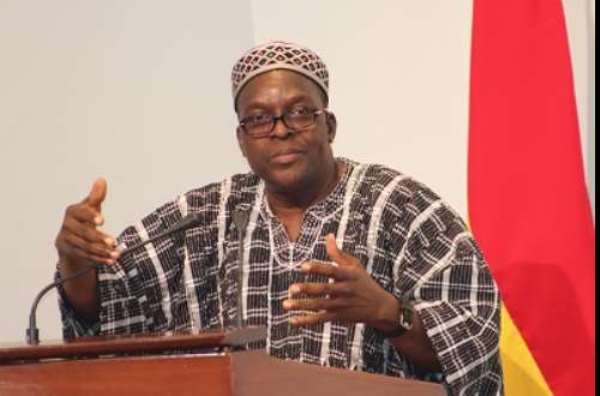 The Speaker of Parliament, Rt. Hon Alban Kingsford Sumana Bagbin has expressed worry over the lack of desire to sell the Central Region as one of the topmost regions that has contributed to the educational, political and economic growth of Ghana.

The Speaker who was speaking at the opening ceremony of the ECOWAS Parliament Committees’ meeting on telecommunication and information technology in Winneba on Tuesday, July 27, 2021 bemoaned how this has affected the superiority of the region considering how resourceful it has been in the history of the country.

“I am always worried that the Central Region in particular is allowing others to overshadow the region because it has produced more of the freedom fighters, more of the intellectuals and more of the illustrious sons and daughters of Ghana than any other area in Ghana,” Mr Bagbin said

The Speaker said he is ready to allocate time to MPs on the floor of Parliament in the area to tout the various contributions of the region to national growth. He has therefore charged MPs within the area to begin thorough research about the region.

“So be prepared and come so we give you opportunity to eulogize your great grandfathers who started it all particularly the kings from this area. I know that if you do not know where you are coming from, you will never know where you are going.”

The Paramount Chief of Effutu Traditional Area, Neenyi Ghartey VII, has commended the Member of Parliament for the Effutu, Hon Alexander Kwamina Afenyo-Markin for his efficiency and commitment towards the growth and development of the community.

Neenyi Ghartey said this when the MP led a delegation of the ECOWAS parliament which included its Speaker, Dr. Sidie Mohamed Tunis, to pay a courtesy call on the Chief ahead of the Start of the Delocalised Meeting of the Joint Committee on Political Affairs, Peace, Security and APRM/ Legal Affairs and Human Rights/ Telecommunications and Information Technology (TIT).

“We would only say thank you to Mr Speaker and the ECOWAS Parliament .We are very fortunate because there are probably better places in terms of hospitality but talking about history and tradition, we stand tall. So we are most grateful to the ECOWAS Parliament for first of all taking that decision and also to government for accepting us to host you"

He added, "If you have somebody like Hon. Afenyo Markin in your midst, nothing goes wrong.”

According to the Paramount Chief, the selection of Winneba as the venue for the event will also serve as a form of education. He said residents will ask questions about the event happening in the community leading to widespread of knowledge about ECOWAS and its importance to the sub region.

“We know for sure your being here will be graced to us all. It is another form of education; bringing governance to the doorstep of the people. They will ask questions, there will be radio commentaries and discussions and this is how we are going to get the people educated on what ECOWAS stands for but today here it is. The ripple effect will be across the Central Region and the entire country.”, Neenyi Ghartey said

About the ECOWAS Parliament

The ECOWAS Parliament, also known as the Community Parliament, is one of the institutions of ECOWAS.

It is the Assembly of Peoples of the Community, serving as a forum for dialogue, consultation, and consensus for representatives of the people of West Africa with the aim of promoting integration.

It was established under Articles 6 and 13 of the ECOWAS Revised Treaty of 1993. The initial protocol establishing the Parliament was signed in Abuja on August 6, 1994.

It provided for the Structure, Composition, Competence, and other matters relating to the Parliament.

The Parliament is composed of 115 seats. Each Member State shall have a guaranteed minimum of 5 seats. The remaining 40 seats shall be shared on the basis of population.