NPP Is the Lesser of Two Evil Political Parties 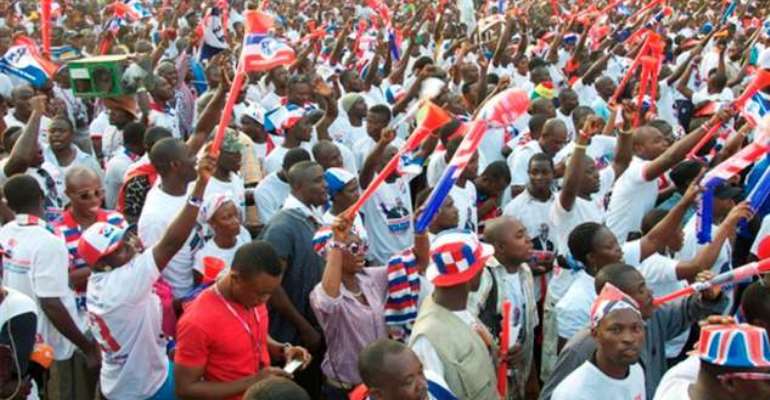 He writes the kind of exuberant and tentative English that I used to write when I was in middle and secondary schools, partly to impress the girls who did not think any much better than to facilely take yours truly for a rhetorical genius. And who knows? Perhaps a veritable rhetorical or an oratorical genius, indeed, I must have been, after all. But at 18 years old, I was already writing and reading my poetry on GBC-2, the only English and Commercial Service of the state-owned Ghana Broadcasting Corporation (GBC), while I was growing up in the mid and late 1970s. and as surefire as Hell, the girls really did love me, or at least they rapturously admired the fact that I was one of the few teenagers in the country privileged enough to have precociously learned to wash my hands. So, I could comfortably sit shoulder-to-shoulder and eat with adults the age of my parents and sometimes even much older than my parents on Ghana’s radio and television stations.

I was also giddy with the ambition of making it big in the country in the near future, although the abject despondency wrought by the so-called Rawlings’ Revolution had left me, at some point, with absolutely no hope but the eerily looming prospect of a developmental cul-de-sac. An existential dead-end, that is. You see, the only clear and obvious avenue that young Ghanaian men and women such as I had in significantly changing their seemingly stultifying game of life was admission to one of the then three major universities in the country, namely, the country’s oldest and flagship academy, the University of Ghana (UG), Legon; the University of Science and Technology, Kumasi. Presently called the Kwame Nkrumah University of Science and Technology. The latter establishment was initially named after its pathologically narcissistic putative founder, Ghana’s first postcolonial Premier or Prime Minister, later to be self-redesignated through an election that many observers, both internal and external, believed had been thoroughly rigged by an incumbent Prime Minister Kwame Nkrumah and his so-called Convention People’s Party (CPP) as Executive President Kwame Nkrumah.

Nkrumah’s name would shortly be removed in the wake of the first successful and most auspicious military putsch in the country, on February 24, 1966. And then, of course, there was the third and youngest and the least prestigious University College of Education, located in Cape Coast, the Central Regional Capital, simply known back then and today as the University of Cape Coast. And then in the wake of the so-called Rawlings’ Revolution of December 31st, 1981, these three existing destiny game-changers were rudely and abruptly and effectively shuttered for close to one year. That was around about 1983. Which also meant that those of us who were preparing for admission to one the aforementioned academies could decidedly not do so, until the freshwomen and men in these academies had been promoted en-masse to their second or sophomore year. That was how the Sixth-Form National Service came about. Yours truly would end up teaching English, Literature, Commerce and History to Forms Four and Five Students at Osu-PRESEC or the Presbyterian Secondary School at Osu, Accra, located scarcely 200 meters north of the Castle, or the old Danish slave-marketing fort in the heart of Ghana’s capital.

The Castle, until just a dozen, or so, years ago served as the bona fide seat of governance in postcolonial Ghana. Now, I eagerly decided to rejoin the rather understandably angry but grossly misguided article written by a presumably young budding intellectual or even a scholar by the name of Mr. Kwabena Aboagye-Gyan, partly because my own nephew who is presently about 40 years old is also called Kwabena Gyan. When he attended Okwawu-Nkwatia’s St. Peter’s Secondary School, popularly and affectionately known as PERSCO – Kwabena Gyan was popularly known as “Burkina” because his recently deceased stepfather was working for the US Embassy in the Burkinabe capital of Ouagadougou. So, Kwabena Aboagye-Gyan’s name pretty much reminded me of my own nephew Kwabena Gyan, presently a Staff-Sergeant in the US Army Reserves and an employee of the United States’ Customs Division of ICE, formerly known as the US Immigration and Naturalization Service.

Anyway, the Kwabena Aboagye-Gyan article that I am rejoining or responding to is titled “You Are Wrong, Nana Obiri Boahen” (See Ghanaweb.com 6/14/21). Nana Obiri Boahen is, of course, the locally quite well-known Deputy General-Secretary of the Akufo-Addo-led ruling New Patriotic Party (NPP). Evidently, the writer of the afore-referenced article or column is uncontrollably peeved by the fact that Lawyer Obiri Boahen would be traipsing the length and breadth of the Sovereign Democratic Republic of Ghana, admonishing any citizen and eligible voter who cares to listen to rally and massively vote to retain a highly likely Bawumia-led New Patriotic Party in the 2024 Presidential Election, actually General Election, in order to ensure that the leadership of the NPP continues with the steady delivery of the good and progressive policies and projects that it has already implemented and is still implementing, such as the critical vitalization of the Mahama bungled Kufuor-minted National Health Insurance Scheme (NHIS), the Fee-Free Senior High School System, whose feasibility the then-President John “Brazil World Cup” Dramani Mahama fiercely contested in the leadup to the 2016 General Election.

Then, of course, the Akufo-Addo signature One-District, One-Factory policy initiative, necessitated by the nation-wrecking collusive collaboration between the Jerry John Rawlings-led regime of the National Democratic Congress and the Bretton-Woods establishment of the International Monetary Fund (IMF) and the World Bank (WB/IBIRD) to deindustrialize Ghana, is one national development strategy and plan that cannot be entrusted to the kleptocratic and predatory leadership of the faux social democratic National Democratic Congress. You see, Sonny Kwabena Aboagye-Gyan, what is at stake here is the very soul and destiny and future survival of the Sovereign Democratic Republic of Ghana. And thus far, vis-à-vis our collective epic battle against the predatory environmental destructiveness of the Galamsey industry, it well appears that the NPP is the lesser of two evils, that is, compared to the NDC.

What is even more significant, fiercely fighting for the NDC to be kept on the arid margins of the opposition, as Nana Obiri Boahen is reported to be doing, does not absolutely in any way mean that the Deputy General-Secretary of the New Patriotic Party is, somehow, inadvisably or unwisely promoting the dogged pursuit of a One-Party State. There may very well be far better alternatives among the dozens of Left-leaning splinter opposition parties that could rally synergistically or coalesce to take up the vacuum that will be left behind, in due course, by the National Democratic Congress, which has not done anything meaningful or worthwhile for Ghanaian citizens in the last 40 years or more. You just critically and self-protectively ponder this most crucial matter, Sonny Kwabena Aboagye-Gyan.